TCU vs. SMU: June Jones looks wrong in a normal shirt, but wear a Hawaiian shirt all the time on the mainland, and people assume you're a pedophile. #sad

Virginia Tech vs. Boston College: Frank Beamer knew he was in trouble when they saw it. The glowing star bounced into Spaziani, the music started, and they knew it was over 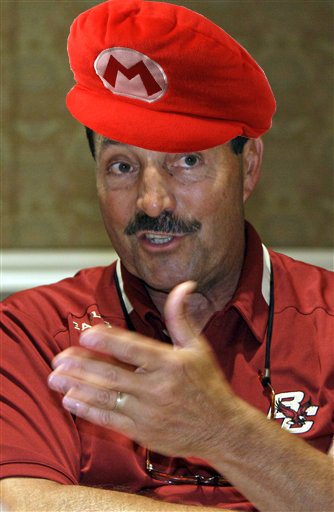 Stanford vs. Notre Dame: "By nature all men are equal in liberty, but not in other endowments," quoth St. Thomas of Aquinas. Also: "Andrew Luck drops fucking bombs."

NC State vs. Georgia Tech: Tom O'Brien lit the sparkler. It glowed with a phosphorescent white light. "Ooh, pretty!" said the GT safety as the ball went over his head.

North Carolina vs. Rutgers: The locker room. Halftime. Butch Davis: "I confess. I lied to you. This is not the NFL." "That's OK, coach." "This is the ACC." #masssuicide

Georgia vs. Mississippi State: Bobo rearranged is "boob." Mark Richt has "harm trick" as an anagram. Dan Mullen's is "Am Null End." Anagrams can be  depressing, actually.

South Carolina vs. Auburn: Estimated time to explain Jenga to Chizik: 94 minutes. But you'd have Trooper Taylor waving a towel for you the whole time, so that's nice.

Alabama vs. Arkansas: Petrino came out for Alabama; Saban for Arkansas. In his box, Sexton cackled, and smiled thinking about his best ideas coming from boredom.

UCLA vs. Texas: They stared at the crater. "I've never seen a meteor kill a QB before. Just unbelievable," said Mack Brown. Neuheisel sighed. "Not for us."

Oklahoma vs. Cincinnati:  It would kind of fate/ If Cincy played like Utah State/ To give the Sooners a bit of fear/And liven up Jones' first year. But Cincy sucks.

Oregon State vs. Boise State: Kellen blushed. "You shouldn't have." "Cinderella needs slippers," Brent said. He poured the beer into the shoe. In the hot tub, they drank.