Share All sharing options for: EDSBS'S BEST IN CLASS: WEEK 3

In which we reward the highlights and lesser luminaries of Week 3.

IMPROVING! ON-FIELD EDITION: Vanderbilt, who doubled up Ole Miss in Oxford (you might have heard). What beating the Rebs counts for at this point is very much up for debate, but it's a conference win, so bully for Vandy and for our dear Robbie Caldwell. OFF-FIELD EDITION: Mark Dantonio, who's resting comfortably after suffering a heart attack following Saturday night's fake-figgie heroics. (We think it may have been the actual human smile visible on his face afterwards that shocked his system as much as the stress.) Get better, sir. We're really starting to like you and would hate to see you have to retire now.

SUPERSTAR! Colin Kaepernick, about whom we tried to warn you, earned the following stat line in a Friday-night blowout of Cal: 10/15, 181 aerial yards, one TD pass, 17 carries, 148 ground yards, 3 rushing TDs. We would very, VERY much like to see Nevada and Michigan in a bowl game. HONORABLE MENTION: Jim Harbaugh, who called a timeout to ice Wake Forest's kicker running down to halftime and up something like 41-7. Jim Harbaugh is metal as fuck.

ADEQUATE! Our sincere congratulations to the name programs who managed to stave off mortifying upsets in Week 3. They include, but are not limited to, Michigan's offense negating a 20-point Q4 comeback attempt by Massachusetts, Texas A&M's own 21-point fourth-quarter revival to beat FIU (WHAT?), Mizzou surmounting San Diego State, and Syracuse deciding in the second half that losing to Maine might not be as alt-desirable as it seemed in the first quarter. Even Virginia Tech managed to beat overmatched competition this time! Hugs!

HAND UP!  We did not enjoy the Tennessee-Florida game, as usual (and neither did Fearless Leader, in point of fact), but we very much enjoyed watching Jordan Reed catch a pass with his helmet decal: 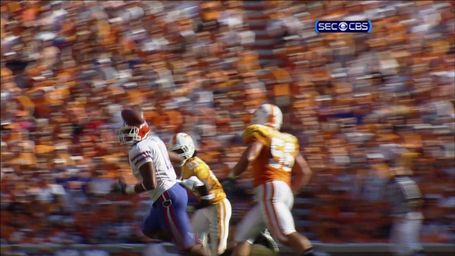 [screencap via our own indispensable bubbaprog]

YOU TRIED!  USC missed three (3) 2-point conversions at Minnesota. Arizona State lost to Wisconsin thanks to a blocked XP. If there is a Football Jesus in heaven, one of these plays will end up making the difference when the Trojans and Sun Devils meet in November. (TRY GET IT TRY)

TAKE TURNS! Rotating quarterbacks are happy quarterbacks! Just ask the OBC! Or ask Bryan Ellis, UAB's backup QB who led a 23-point comeback against Troy that ended with a last-second Hail Mary and a one-point win for the Blazers.

SIT STILL! Thanks to the team on the other sideline being Portland State, we were unable to see whatever Oregon was doing for the final quarter of its Saturday cupcake tilt, but 69 points in the first three quarters and none in the fourth indicates they may have been taking knees on every snap. How gracious.

GRAPE JOB! Last week Georgia OC Mike Bobo said he didn't really know how he was going to open up the offense for Aaron Murray against Arkansas. He tried, though, and when he gets to that "tight end" unit next semester, watch out!

CREATIVE! It was difficult to watch, but the artistry and variety of Arizona sacks on Ricky Stanzi Saturday night was impossible to deny: Between the defensive end backstab, the d-tackle group hug, and The Iron Gopher (i.e. the one where it looks like a mutant gopher has grabbed your foot), we simply cannot pick a favorite.

BUSY BEE!  Temple phenom RB Bernard Pierce's hand injury is not causing him too much trouble, it would seem: After racking up rushing totals of 75 and 57 yards against Villanova and Central Michigan, the sophomore cannonball blew UConn to shreds in Week 3, with 169 yards on 26 carries.

GOOD HELPER! We are thrilled to death to meet NC State's new LIVE WOLF MASCOT, and cannot wait to see him incorporated into game action. Just wait'll the weather cools down a bit, and it'll be all like, "You see the State DB using the sideline and the REAL WOLF DOG as an extra defender." [H/T: Fesser]