The weekend's games are summarized in exactly 140 characters or so because we love two things in life: microfiction and Twitter-length anything.

California at Nevada. You can't rollerskate in a buffalo herd/ Unless you're Jeff Tedford/ Okay, just about anyone else does it against Hawkins/ Nevada loses bad.

Iowa at Arizona. Ash covered the burnt ruins. Hasselhoff lay pinned, but the beast hesistated. "You live so the others may know the horror," said Clayborn. 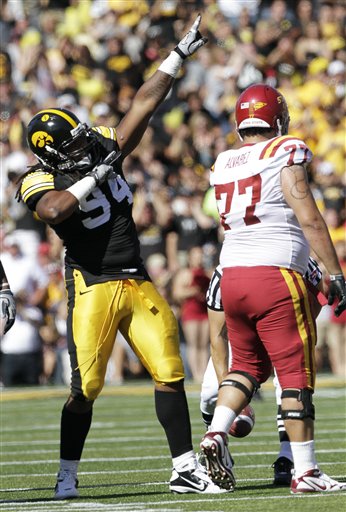 Nebraska at Washington. Ayn Rand hates Jake Locker at quarterback. "Sacks require only the sanction of the victim!" she said watching him bent in half by Nebraska.

BYU at Florida State. The BYU Bus rolls into Tallahassee. Two Mormons talk. "This town reminds me of my mission." "Where were you?" "Brazzavile, Congo, actually."

Alabama at Duke. Bama fans, Duke fans will tell you this is the only way you'll ever get into Duke. You might as well shit in the bushes while you're there.

USC at Minnesota. "It's as close as I have to home," says Lane Kiffin about Minnesota. When he sets it on fire and steals the tv, you'll see he wasn't lying.

Houston at UCLA: A new scientific unit: the KP, or how many Kevin Princes a quarterback is worth. Case Keenum's value, even half-concussed: 5,928,838,982 KPs

Mississippi State at LSU: In Les Miles' remake of Bridge on the River Kwai, a colonel makes a bridge out of dynamite and then tries to blow it up with a steam train.

Arizona State at Wisconsin: "Here's the deed," they said, passing out in the streets and bars. Few men win states in a beer pong game. Not many men are Dennis Erickson.