Share All sharing options for: MAD WAGERIN', WEEK THREE: WIN SOME, LOSE SOME

Peter suffered the indignities of cruel fate last week, but hopes to bounce back this week in week three in this edition of Mad Wagerin'. He's just going with the flow, and it's all the same to him.

It all sounded great last week, didn't it? "Dang, Pete, you're making me think twice about my office pool picks," everyone said. "I'm riding or dying with Pete this week. Ride. Or. Die."

But the dangerous thing about reasoning is that it can go backward as well as forward, which is how paranoid schizophrenics manage to exist, and other borderline cases manage to thrive. Just as it's never a long way from sanity to the other, consistently successful football wagering means consistently walking the finest line. Of course, without our individual biases, there's no meaning and no living, really; No point in making nor basis from which to make our picks. But each winning week brings increased temptation for the point spread player to go too far in inventing his own reality.

Which is to say that people need people. Or really, maybe next time one of you jerks should say something when you see the Ohio State fan coming off the undefeated week picking the Buckeyes to rise and three other top ten BCS contenders to fall along with Michigan.

Or else, who cares it was only Week 2 and we don't take the early weeks so seriously anyway and goddamit if Crist doesn't have his eyeballs dislodged in the first half we're basically looking at .500 and who the fuck cares it's Week 2 and it was only like 1 unit a game and hmmmmmph we're digging a little deeper for Week 3. 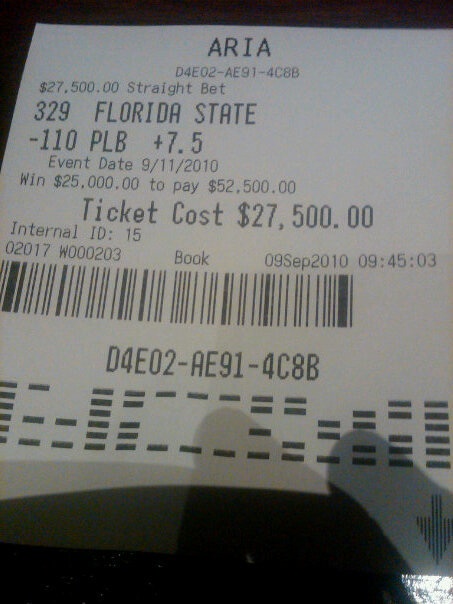 Tennessee +14 over Florida (3 units) 3:35 PM ET, CBS: I'm giving the Tebow Void thing from last week another try. Meyer's retirement and the Pouncey snaps are still too weird. Getting B.J. Daniels'd in the swamp is one thing. Neyland is different, and what else was weird is the rain delay there last week. Everyone's like "the Vols couldn't stop LeMichael James, how will they stop Demps," which sounds like when they said "the Sooners couldn't stop Utah State, what are they gonna do when Christian Ponder gets to town?" Oregon might be a lot better than folks thought they were. People learn things. I like the new coach at home to hew to the template from last week's nice first half against the Ducks and bounce back in the big rivalry game here. Or the Gators can win by 13.

Semi-relatedly re: "Time to die." Has Emo-Rainey been ruled out here? Is it possible that he was really sad instead of really mad? Aren't those lyrics to a million songs? Just asking, maybe just to say that Rainey's lawyer might not have too much work cut out for him. Either way, it's more evidence of the Tebow Void.

Washington +4 over Nebraska (2 units) 3:35 PM ET, CBS: There was a lot of wailing after the Huskies lost a close one at BYU in Week 1. Let's say an underrated Air Force unit snuck up on the young Cougars last week, who are probably still pretty good, and Sark saves the season with a big one against Nebraska at home. Nebraska's defense and dynamic young quarterback aren't undervalued here, and Jake Locker backlash might even be overvalued at this point.

Texas -3.5 over Texas Tech (2 units) 8:05 PM ET, ABC: Read Andrew Sharp's take on Mike Leach's exit from Texas Tech and ask who wants to be right if it's wrong. I'm fading Texas Tech in big games until a significant new consensus is reached one way or the other (I'm undefeated doing this so far this season).

Michigan State -3.5 over Notre Dame (2 units) 8:05 PM ET, ABC: These are always fun. After what happened against Michigan last week, I'm shelving my optimism for the Brian Kelly Era and realigning with the Under Toad that's been yanking at Irish ankles for most of the last two decades. Even a three-percent chance of Nate Montana is plenty to counterbalance the 94% chance of Dantonio Face here. How tough to take the season's first road trip to Sparta after such a deflating loss at home. Sparty has the only Cousins who you'd be glad to see marry your sister, plenty to go at the Irish through the air, and enough muscle to keep them from pounding the rock. These are always fun.

How many ways do we hate picking the Wildcats here? Arizona wouldn't exist if it wasn't for the air conditioner, and the freon-addled sunchasers lose one of their few natural advantages by playing a night game here, against Stanzi (the night belongs to Stanzi). We have to go in with memories of what happened the last time the Wildcats played against a defensive line, and knowingly align ourselves with folks who make wagers based on things like Iowa not having won west of the Rockies since 1987.

But timing is everything, and the sad truth is a 1-point win is the absolute best Hawkeye fans can hope for. If you've spent even one football weekend at a Vegas sports book you know. Everyone chasing his Saturday losses will take Iowa here in the last grasp (the action at most books is at least 90% Hawkeye already), meaning either Arizona covers, or the universe collapses.* Console yourself with this list of reasons that Iowa will lose from Black Heart Gold Pants.

*Or else it'll be one hell of an NFL Sunday.

That's all for this week for me here. Arkansas/Georgia was too hard to pick with Green's status up in the air. We'll probably add some picks to the slate at Frowns some time between now and Sunday (not least because Michigan plays UMass this week, and what's educational is tying your fucking shoes). Your angles in the comments are appreciated, as always.