In which no variation of the term pigbitched halfwit is applied to describe any of Florida's offensive staff. For additional heft, play this in the background while you read it. No one said the musical cues would be subtle. Jimmy Page playing hillbilly guitar riffs over crashing John Bonham will get old never.

The first half was garbage, and not even new, exciting garbage. For a half the Florida Gators continued to repeat the mistake of working Brantley like he was Tebow Lite*, even throwing in the shovel pass triple option play. This may have been our favorite bit of offensive comedy: instead of trailing out the option or even acting like he could, the play turns into a middle screen of sorts where the inside back or receiver takes a gumball light to his head, straps it on tight, and then turns it on and waits for the defense to annihilate him. 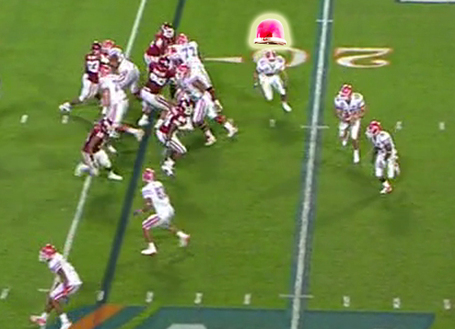 Couple this with Deonte Thompson sharing his ongoing struggle with Cockfingers,** and we spent the better part of the first half biting through dinner plates and constructing elaborate plots to hire away Gus Malzahn's twin brother Russ from Auburn***

Accepted at this point: Florida benefits from BJ Daniels' superb selective blindness and his charitable donations, four in all. Before anything else it should be acknowledged that USF time and time again snatched defeat from the jaws of opportunity, and then said "fuck it" and just threw themselves into the jaws just to see how it felt. We have no idea why USF attempted more than ten passes on the day, much less their final total of 23, and commend their offensive coaching staff on making Florida's look skilled, calm, and collected. We toast you with the drink of Tampa locals, USF offensive coaching staff, and raise a glass of Franzia strained through a stripper's g-string.

They could have blown us off the ball for a good bit of the afternoon, and chose not to. Muchas!

With that said let us sing the praises of Polynesian linemen. The offense cracked out the hammers in the second half and decided to maul the defense unti they whimpered. The blocking assignments seemed to be secondary to the task of hurting people, and that may be the highest praise you can give an offensive line: they wanted to harm people, and just happened to open up ginormous running lanes for the backs.

This takes less than a whisper for Jeff Demps, who like light can slip through the smallest of cracks, and may in fact be a quantum event happening on every single play. His sideline run where he fell, consulted the onboard gyroscope-equipped stability system, and righted himself to continue scorching the very oxygen around him should have been called back for sheer lack of fairness. 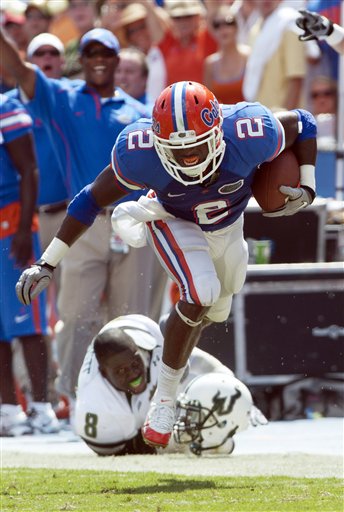 For the bigger backs, though, the vicious blocking up front allowed for some brutal submission running through the fourth quarter. Moody has become Kestahn Moore without the fumbles (he, too, suffered from Cockfingers), and picked up steam once they stopped calling lateral runs with him, but the new shiny candy remains Mike Gillislee, redshirt sophomore and pain artist of the year on offense.Gillislee is making you a painting called "Mutilation."  It's sexual and violent, and he thinks you might like it (especially if he gets more than four carries a game.)

Mike Pouncey graded out highest among the linemen, rebounding nicely from the worst game he will ever play as a center at Florida (fingers crossed,) but we know the real secret was the presence of Jon Halapio and his magical Polynesian hair, which has the ability to make your offensive line 10% more effective simply by its mere presence. If he hadn't had it in a ponytail USF would be missing several defensive linemen today due to severe injury, but Urban Meyer ordered him to curtail its power by braiding it into a ponytail for safety's sake. Never say he's not merciful.

251 yards rushing against a pretty good defense. Nothing to sneeze at, and certainly an improvement from last week.

Aside from an attack of cockfingers, how was the passing game? Tidy, but not great. Carl Moore had his best game yet in terms of situational performance, catching several dodgy balls from Brantley for first downs. Deonte Thompson also worked the markers and had a career high 83 yards on the day. Neither has caught a bomb yet, and the offense still can't find a way to work in Andre Debose in the passing game. Rainey was lost to concussion early, but he'll be fine with some rest, aspirin, and application of ample womanflesh. Omarius Hines is fetal, but coming along slowly.

Brantley seems very comfortable stepping up in the pocket, and that's good. He trebuchets deep balls, and that's bad. He throws a nice fade route when there's a size advantage: that's good. He nailed an umpire with a throw after the lone bad snap from Pouncey: bad, but hilarious, and there's something to be said for that.

Does any of this function yet? Not together, though the power run game is a very, very promising development. We were going to note how nonsensical running Demps on 3rd and short was, but as it turns out there's not data thus far to back that up since he went eight yards on one carry, and 26 on another in that situation. The offense still feels arrhythmic, schizoid, and lacking any real identity, but it showed signs of coherence with the run, and everything else can--in a perfect world--build off that. We might see some very bland playcalling as a result, but it might make really nice crushing noises if the defense holds up their end of the bargain.

It follows the pattern of most Urban Meyer teams at Florida: open auditions on the field for games one through five, then upward trend in overall offensive improvement. Sometimes that goes to Manageable Chris Leak Placeholder-style production, and sometimes that becomes the 2007/2008 Quarkback Blowtorch. The point is that this follows the pattern for most Meyer-era offenses, and the South Florida game is right in line with the usual scatterplotting.

*Now with exciting inability to smash out close third and ones!

**This tragic syndrome results from a a ball approaching the hands of the afflicted, upon which the victim's fingers turn to limp, useless penises. No, this has no other recreational benefits, you twisted pervert.

***He does not exist, but he did when we were hallucinating from rage.