TROY WOOLFOLK IS NOT AFRAID TO TELL YOU YOU ARE DISEASED

Share All sharing options for: TROY WOOLFOLK IS NOT AFRAID TO TELL YOU YOU ARE DISEASED

Hey, you're about to have blockquote for lunch whether you like it or not. Troy Woolfolk, Michigan's senior cornerback, discusses the quarterback race between Tate Forcier and Denard Robinson. A casual scene at Big Ten Media Days. imagine the lumpenfolk reporters with their pants on and belts buckled for the moment.

"Denard has been out there through the thick and thin and been out there all the time regardless if he's hurting," Woolfolk said. "And Tate, he tries to come out, but he's not as consistent as Denard is. And that's allowed Denard to jump a little bit ahead of Tate and I think that Tate's going to have to do a lot of work to catch back up to Denard in camp this year."

According to Woolfolk, what was once a neck-and-neck race between Forcier and Robinson for the starting quarterback job has begun to tip in Robinson's favor. And a big reason for that, Woolfolk said, is the team's perception of players who don't show up to voluntary workouts. "I personally have a lack of respect for them," Woolfolk said. "The outlook on them is kind of diseased. Like you don't want to be hanging around those people because they have bad work ethic. But at the same time, it's my role to try to persuade them to come out more."

That is a distinct move into "someone got told," and to the reporters openly pleasuring themselves. Michigan men stop at this point, allow you to say "OH SNAP!" and then politely cease speaking, since Michigan men always maintain a class tie of decorum wherever--

According to Woolfolk, Forcier hasn't shown up to as many workouts as him and the other seniors feel he should have, and Woolfolk said it's hurting his teammates' perception of their signal caller. "The only reason he's not really labeled as diseased is because of the way he was able to carry the team last year before we started losing. People still trust him a little bit, but he's starting to lose that trust." 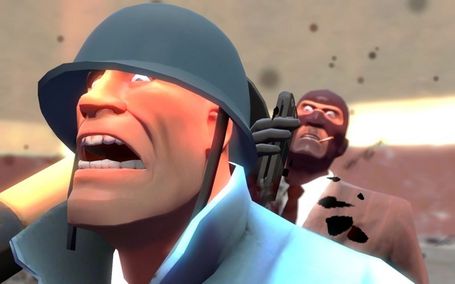 Michigan is gonna be SO MUCH FUN THIS YEAR, Y'ALL. (HT: BHGP)