HE'S A-WASHAUN HE'S A WAAAAAGGGHHHH (CRASH) Washaun Ealey was arrested for hit-and-run, proving he's a hard runner between the tackles with little regard for anyone in his way on the field and off. This happened as we were writing this, so details to come. in the meantime, if it holds UGA is going to win the Fulmer Cup (hit and) running away.

MICHIGAN FOOTBALL, SUBTITLED BY BUFFALAX. The guns, fake or real or Airsoft, sitting on the counter at 0:45 or so, aren't so shocking. Plenty of people own guns. Sometimes they just lay them on the table, or the bar, or carry them through airport security, or sometimes accidentally drop them on the floor during meetings. When they accidentally discharge in these situations, apologies and fruitbaskets are customary unless the accidental shooting came during a lengthy meeting with Powerpoint presentations. In that case, just wait for the victim to way "you're welcome" before expiring. It's the only polite thing to do.

If those are real guns in the video, then Michigan is merely being fucking serious about this season, but what's really entertaining about this Michigan countdown video is the Buffalax'd subtitling you can get on the Youtube video, which it's the illiterate that the no that have a with that Korea a this stuff-- 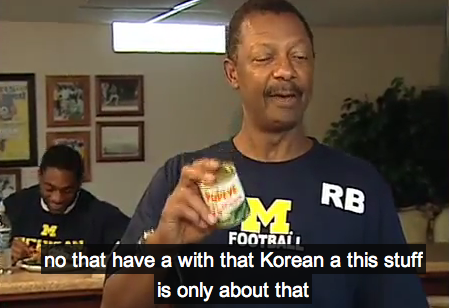 ACCORDING TO THE NEW YORK TIMES: The best indicator of Urban Meyer's health and stress maintenance over the next five months will be the presence of actual noticeable assmeat holding up his khakis.

Meyer’s poor health last season could perhaps best be summed up by his sagging shorts. Florida’s strength coach, Mickey Marotti, one of Meyer’s closest friends and confidants, noticed before the SEC title game that Meyer’s khaki shorts drooped further as the week went on. "When he’d walk, his pants would sag halfway down," Marotti said. "He looked like one of our players. He completely lost his entire rear end."

Championships will equal a 250 pound Meyer slamming slices of double meat lover's stuffed crust pizza in his mouth on the sidelines, and the greatest  season ever will result in his use of a Lark on the sidelines and subsequent stomach-stapling. Gary Danielson will circle and highlight this as the season goes on, and do not think we are joking here.

UNIVERSITY OF NOVEL COMPOSITIONS. The "Nanny-As Tutor-As-Program-Killing-Evil-Paper-Factory" storyline hasn't been mentioned by anyone but Joe Schad, but the young woman who worked with UNC football players and who may have written papers for them also worked in the Davis household as an "academic coach" for Davis' children. No one has been suspended for any sort of playing time yet, but one should note that Butch Davis' contract allows for him to be fired with no further payment of contract if NCAA violations occur under his watch.

Between this and the Gamecocks' ongoing hotel issues, the NCAA is just going to declare anyone in states containing the name "Carolina" invalid for the 2010 season. East Carolina, you're suspended for two years. Why? BECAUSE THEY SAID SO, THAT'S WHY. It doesn't matter who did what. This is like the French Military: we're just going to shoot everyone as an example.

UNC should have at least three starters available for the game, something LSU offensive coordinator Gary Crowton plans to take advantage of by having Jordan Jefferson run the option while Russell Shepherd passes thirty times. #theyllneverseeitcoming

COME ON DOWN TO THE WHOREHOUSE IT'S NICE. The rage continues, and justifiably so, since the Big Ten is going to mess with a traditional rivalry game of great import in the name of cashing in off a neutral site championship game. Delany says the obvious, since even Ohio State's president supports the plan that will destroy life as you know it in the conference, and thus force the special snowflake WAAAAAANK Big Ten into the big whorehouse of collegiate athletics with the rest of the dumb, filthy, non-gill-having conferences.

Remember: Big Ten fans are different, have gills, and have special emotional demands you can't possibly understand. Despite this, the authorities are moving in, and if you want to see how it ends play through to the end of Red Dead Redemption. The Big Ten is in the whorehouse with every other conference, but let us tell you: it is very, very nice in here, even when they move the furniture around without telling you. Cheerful anarchism remains the only logical approach to emotional survival as a college football fan. Choose misery and tradition, or sail with your hair on fire into the future you don't control anyway.

Now if that doesn't top the "dumbest thing Orson's ever written," we'll just keep going until we exceed the new DERP standard mentioned there. It's important to have goals in life.

HE DIDN'T SAY IT HAD TO BE A GIRL. If you need Ohio State tickets, you know who to call.

ANTHONY ALLEN IS A TECHNICAL GENIUS. The Georgia Tech B-back will just give out advice on Twitter for free, man. So generous of him.

HELLO MISSOURI THIS IS REALLY NOT GOOD. Derrick Washington, Mizzou's leading rusher for the past two years, is being investigated for sexual assault and is suspended.