Quarterbacks are, on the whole, not particularly likable football players. Evolution-wise, they threaten the average male to an extreme degree due to their combination of strength, speed, and debonair good looks. Having been stroked and coddled since childhood, they often combine absurd confidence with a galling lack of life skills. We might be talking about Peyton Manning, who had to have his girlfriend in another state order Chinese takeout for him from a Knoxville restaurant. We might be talking about Mike Vick, who saw nothing wrong in a little harmless dog-fighting. Or we might be talking about Ryan Leaf, who is Ryan Leaf.

They also on the whole disparage the notion of hitting someone and stand several ranks above you in athleticism, so they are a far cry from fan favorites like the fullback ("Me if I really got in shape, stopped drinking beer, and just worked really, really hard!") or the offensive lineman ("I like him because he never gets recognition, sometimes pees himself on the field, and has knees held together by old twine!")

Yea, there exist those who do triumph over their good looks, inbred dislike of contact, and seemingly effortless ability to walk cock-first into swimming pools of cash, good fortune, and women. Some of them do it with overarching charisma; others with aberrant charm. Some simply aren't going to play football in the NFL, and insist on being awesome anyway in ways that don't necessarily intersect with on-the-field greatness.  (Forde's is a good list of guys who are college good to great, but warning: herpefied autoplay video is enabled, because ESPN hates you.)

These four meet that litmus standard of non-performance-related greatness.

For so many reasons Garcia makes this list, and not just because we always imagine a tiny shirtless floating Matthew McConaughey on his shoulder.

Garcia angers Spurrier by throwing to his receivers  while wearing sandals. He keyed a car in his first two weeks on campus. He celebrated the victory over Ole Miss--one largely keyed by the mauling Gamecock defense--like he'd thrown for 330 yards and 5 TDs, and not the 220 yards and 1/0 night he did actually have. He still scrambles like the high school star playing against subpar competition despite three years of SEC experience. You can see the look in his eye when he takes off: I got this, man now FLY EAGLE FLY. When he is inevitably caught from behind or blasted by an onrushing linebacker, he still looks genuinely disappointed he didn't bust a twenty yard gain up the middle. Watching this happen is a joy forever.

The rest of his siblings wen to the Iy League, and he chose to go to South Carolina. Read that last sentence: it is all you need to know of his maverick charms.

Stanzi comes from the Jim McMahon mold of quarterbacks, except that in the coding where McMahon's sequencing it says "BEER" you replace it with "AMERICA." Stanzi's drunk on the USA 24 hours a day, and will sober up when you pull the red white and blue out of his cold dead hands.

We’ll be hanging out on a Saturday night listening to music, and he’s shouting "USA" throughout the house. Why, at this moment, with girls over, are you screaming about America, with an American flag bandana around his head?"

WHY NOT COMMIE? Stanzi also has this in common with McMahon: an ability to look like deep-fried horse shit for long stretches of a game before unleashing three icy death bombs in a row to lead Iowa back to its preferred method of winning, a nutpunch one-point win. Patriotism, streakiness, and the ability to put the harpoon in the whale's eye with the boat sinking? We are all Americanzis whether we like it or not here, citizens. Your only passport is an American flag bandana, your dreams, and a copy of Van Halen's 5150.

Jerrod Johnson. A bit of an aberration since he's actually good and stands a sliver of a chance of playing in the great beyond. Earned his way here for slaying ladies, bagging cash, and burning down the entire karaoke joint after demolishing Blackstreet's immortal "No Diggity" here.

Style and the ability to make Aggie fans forget the legendary Steven McGee equals a pick on this list. (Neat trick: if you see "legendary" next to Steven McGee, YOU ARE UNDER THE INFLUENCE OF HEAVY DRUGS. Do not operate heavy machinery, but if you do put on a wizard's costume before you do it. It will protect you from "the evilness.")

We don't know a whole lot about Tyler Bray just yet, other than him being a three-sport star out of California and one skinny drink of rocket arm. But the scant facts are telling. Look at this mug: his is the face and haircut of a guy who's going to have to lean on his athletic prowess to get him anywhere in life, a genetic reality that can only motivate him to excel on the field.

And via one of our baby bros in Gibbs Hall, that notion hasn't escaped the fledgling QB:

Tyler Bray is the new Casey Clausen, in that he wears flat bills, goes to the club every night with his hood up, says "holla" unironically, and spends all his time facebooking girls he doesn't know for action.

Who could ask for more in a team leader? You could, you say? Well, PEEP THIS FUCKING BACK TAT, HATER: 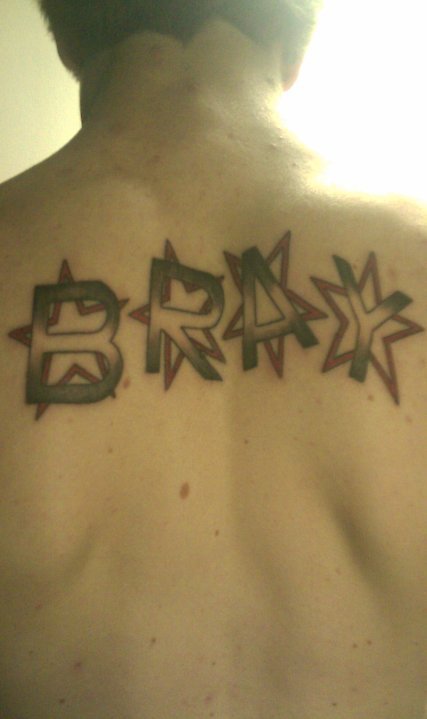 (Via.) Mother of God, it's like staring Destiny in the shoulder blades. Was Tyler Bray a foundling? Did he turn up in a basket on the doorstep of some lonesome interstate fireworks superstore? Some men are born great, some achieve greatness, and some have greatness inked onto their upper back in fonts better suited for a used car dealership. Welcome to Rocky Top, young buck.