AND WE'RE MARCHING TO BASTILLE DAY.

Why is Bastille Day one of our favorite international holidays? Because it celebrates a bunch of people RIPPING DOWN A BUILDING WITH THEIR BARE HANDS. Vive la France, since without them we wouldn't have Dumas, Banlieue 13, or modern viticulture as we know it. (Oh, sit down Germany. White wine doesn't count.)

IMAGINE THAT A BAR BRAWL INVESTIGATION WOULD INVOLVE HAZY MEMORIES AND INCONSISTENT TESTIMONY. The crime that threatened to break all Fulmer Cup records is, in fact, merely the kind of bar brawl that looks like all other bar brawls: poorly remembered, filled with inconsistent testimonies from witnesses, and one guy in the hospital while another happily displays his autographs from the Tennessee Volunteers on ESPN.com. 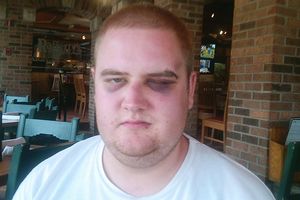 Chase Nelson started the fracas, according to this man, Gary Russell, a 20 year old Tennessee student who bumped into Nelson on the way to and from the bathroom. Russell did say the only players he could positively ID were Montori Hughes and Denarius Moore, so he's contradicted himself, but to add absurdity to complete murk we have the people who do it best: lawyers.

"Montori Hughes was the victim of an unprovoked assault while at the establishment," [attorney Greg] Isaacs said. "Our witnesses and investigation have confirmed that Mr. Russell threw the first punch, and this has been corroborated by not only the individuals at the establishment but also by photographs showing the damage to Montori Hughes' face."

If Russell--215 pounds and not the MMA kind of lean poundage, either--punched 305 pound Montori Hughes we're already at DERPcon 3 here. Let's just concatenate that lunacy by assuming Montori Hughes actually punched back against someone he could throw through a bank vault door, and we go to DERPcon 2. Add in his teammates actually joining in against--and apologies, Mr. Russell--a Funyun respository, and the Tennessee football team was clearly functioning at full DERPcon 1 status that night at Bar Knoxville.

None of this explains a cop getting stomped in the street, but that's just how deep this clusterfuck truly is. We're not even to that point in the narrative, the part that might result in the most legal fallout. If Chuck Liddell says you can't win a barfight it must be true, but this is further evidence to back up his point.

IT'S LIKE BREATHING TO HIM. Lane Kiffin talks shit even when he doesn't mean to.

The bravado and bombast that marked Kiffin’s brief Tennessee tenure has vanished. "There’s really no need for it here," said Kiffin, who seemingly had almost as many public reprimands from the SEC as he did wins. "I believe when you take a job that there is a specific plan depending on where you are and the state of the program at that time. We didn’t need to do any of that attention-grabbing or working the media to sign the No. 1 class in the country.

Further evidence Lane Kiffin might not be able to find Tennessee on a map, since he clearly had no idea where he was, what he was supposed to do, and how to handle the program he was handed. Estimate of words spoken before he can offend a barista at Starbucks: five, though he can do it in three on a good day. Mike Hamilton, how you are still employed is deserving of a creepy documentary with a ghostly Orson Welles narrating it and explaining it with passages from Notradamus.

THE SON ALSO RISES. If we're going to crack on Bobby Bowden for it, we might as well kneecap the Ol' Ball Coach for it. There's a legitimate question of what kind of rules have to be bent to employ a family member, since we know both Tennessee and Georgia have them, but given that this is South Carolina we have no confidence in making a guess. As far as we know two things are illegal in South Carolina: murder and drinking ostentatiously in church. Everything else is negotiable.

NO, IT HAD NOTHING TO DO WITH HIS STATUS AS THE MICHIGAN QB OF THE FUTURE. George Steinbrenner was an Ohio State assistant under Woody Hayes in the undefeated 1954 season: that much is true, verified, and a part of the Boss's legitimate myth. Whether he drafted Drew Henson just to screw with Michigan is denied by all parties, and cannot be considered to be fact. Naturally this means we assume it to be completely true, and thus salute the recently departed Yankees owner for his blatant partisanship

GEORGIA STATE IS A CHEAP DATE. We'll play you whenever, and then move the date for the price of a Honda Minivan.

DAMMIT BILLY GONZALES STOP HITTING THE LIKE BUTTON. Billy Gonzales' one-man Facebooking spree may have gotten Florida more than the two secondary violations reported, so LSU best keep him away from all social networking sites. He can keep the MySpace page if he wants, though, since unless LSU's interested in recruiting witless sexual predators he can't actually contact anyone of interest on it.