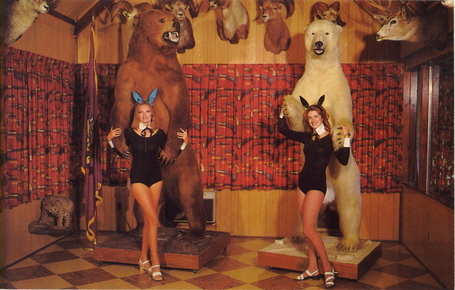 Diligent study of the Digital Viking's recommendations will increase spiritual happiness and liver circumference. Apply weekly and live daily for best results, and soon you too will have ladies and huge stuffed killer bears in your foyer.  (Photo via the newly-indispensable Bad Postcards.)

PATRON SAINT: Sterling Hayden. Sterling Hayden may be best known to movie buffs as Brigadier General Jack Ripper in Dr. Strangelove, and as august an association as this may be for any one man it pales in comparison to the long remainder of Sterling Hayden's life-achievement resume.
Before he turned 23 Hayden had already run away from home and gone to sea at the age of 15, traveling around the world several times in an age before many ships had properly functioning radios and ran off anything but sextants, old maps, and good hunches. He was also granted his first merchant ship command at 22, when we were still drinking ourselves blind in Taiwanese karaoke parlors and slaughtering "Careless Whisper" biweekly. Not all globetrotting adventures are created equally. 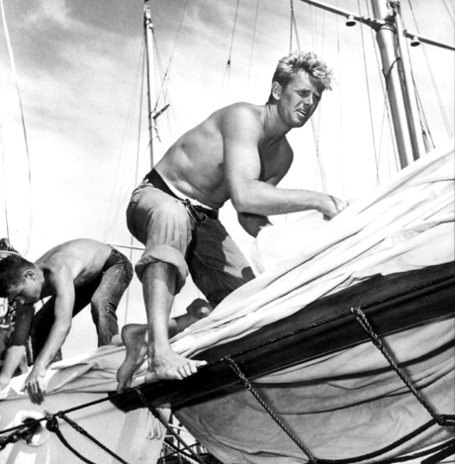 Having mastered the pre-penicillin world, Hayden became a male model because in addition to being an accomplished sailor and capable of commanding the respect of a crew at a young age, he was also 6'5" and so impossibly beautiful he was nicknamed "The Beautiful Blond Viking God." He started making movies. This wasn't a big deal because Hayden was completely unimpressed by everything he saw ever, something he proved by eating Tyrone Power and crapping him out whole on a dare during one of William Randolph Hearst's parties. He followed this up by eating a mansion, five cornish game hens, six orders of potatoes au gratin, and crapping out a palatial estate for Hearst.
In appreciation, Hearst named it for the first nine inches of Hayden's penis, which was named Xanadu.
Hayden got bored and started World War Two just so he had an excuse to go sailing. Considered so fearsome he was both a Marine and an OSS officer, he parachuted behind lines in Croatia, sailed through enemy waters in the Mediterranean, and was commended for his bravery on multiple formal occasions and his mansome beauty on a daily basis.  Keep track: at the age of thirty something, he'd already been a fireman, a ship's captain, an OSS agent, a male model, a movie star, and a paratrooper with a personal commendations from Tito.
You're so behind your life's potential, but keep reading.
He then returned to the US and got in trouble with McCarthy for attending a few Communist Party meetings, something he did because the Yugoslavs he met were cool, happened to be commies, and liked killing people and drinking in the woods as much as he did. He continued to make films solely to support his children and sailing habit, something that came in handy during a bitter divorce in 1958 when he "defied a court order and sailed to Tahiti with his four children." If this same line appears in your life's bio, you are successful based on this achievement alone.
ACHIEVEMENT UNLOCKED: SAILED TO TAHITI AGAINST THE ORDERS OF A COURT
Hayden spent the rest of his life sailing, living on a beautiful piece of land in Sausalito, California, and hanging out on a luxe barge he bought and moved to the middle of Paris. He also beat the crap out of Al Pacino in The Godfather because he knew that one day Pacino would make Scent of a Woman, and deserved the beating pre-emptively. He didn't so much die as run out of things to do, an admirable goal for us all.
DRINK.

Holly: The Peter Lalich-Tail, which has nothing at all to do with rabbits and everything to do with the year's most entertaining Fulmer Cup entry to date (non-moped division). The Lalich-Tail consists of any canned American beer consumed with a floater of lakewater while drunk and clinging perilously to the prow of a speeding watercraft. Throw in a Shasta chaser if you really want to get fancy, and bonus points awarded for finishing one riding double on a jetski with your best bro. ONE HUNDRED COCKTAILS to anybro pulling this off while getting thrown off two I-A football teams in the process.

Orson: For Memorial Day, choose Real Navy Grog for all your lash and sodomy-themed pleasures aboard vessels of all size and manner this weekend. There are as many variants of grog as there are vessels on the sea, but the best warm weather variant we could find accomplished the twin goals of the beverage neatly:

b.) Getting hammered to tolerate long sea voyages and boost "morale"

Pour into anything, because it's grog, and used to be consumed in hollowed out enemy skulls. Correction, now that we think about it: consume using only enemy skulls. If enemy skulls cannot be found or used, hell, just pour that shit into a red solo cup. It's Memorial Day weekend. They'll be all over the place anyway. 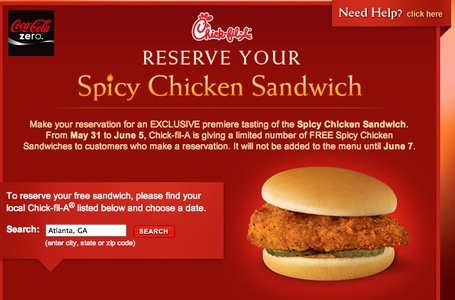 Hey, I can reserve one? Oh, well, let's just check down here and-- 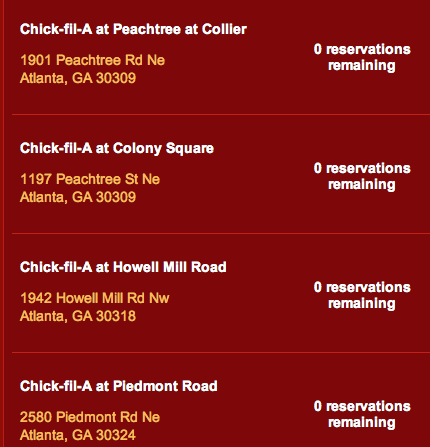 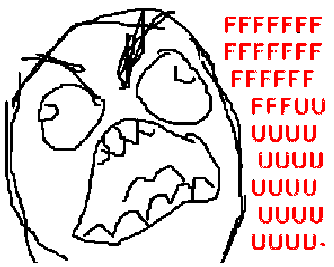 (WIll be available to the unwashed masses on June 7th.)

Holly: The Newark Double, which is a real thing that people eat: 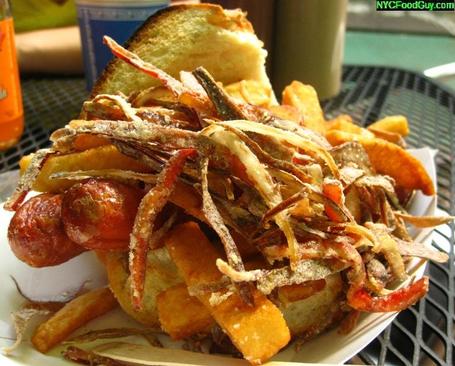 Fair warning: We may attempt to construct one of these this weekend at the EDSBS staff barbecue, alongside the maiden voyage of my recipe for Beer-Battered Cheese Grit Cakes (no foolin') (yes, we're writing a cookbook to pass the time this offseason). Stay tuned. (HT: Fesser.)

Holly: Consider this weekend your training camp for homemade fireworks 4th of July mayhem. Do your research. Don't be this guy at your barbecue:

Cause I'm a redneck woman

And I ain't no high class broad

I'm just a product of my raisin'

And I when I set a car on fire

I do it on remote video

And then catch myself on fire in the process

This isn't even rhyming but watch, I totally set myself on fire and run around like a jackass who is yes, on fire.

Can I get Hell Yeah O GOD I AM ON FIRE PLEASE SAVE ME
(Hell Yeah!)
TRANSIT.
Orson: Driving is stressful, something Detroit used to understand before the drastic change in production when cars were metal instead of plastic. Once upon a gilded time, Americans enjoyed unbuckled freedom in the plush, 16-foot wide front seats of their homes on wheels, enjoying the robust American landscape, listening to a little "Mambo Italiano" on the radio, and kicking back on the open highway with a cocktail or eight.
Hit 'em with the hot shit, Cadillac Eldorado Brougham. 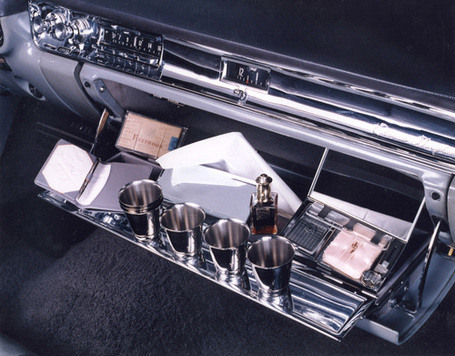 That's how we won the cold war: one ornate set of mobile wet bar accessories at a time, my fellow countrymen. (Via Jalopnik via Matt.)

Holly: If you want to go from Vancouver to Honolulu, Travelocity says United will take you there for $321, but where's the adventure in that? Particularly when you could be getting mad exercise along the way pedaling this: 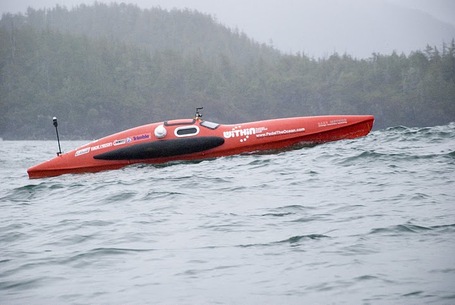 Yes, crazy Canuck bastard Greg Kolodziejzyk is attempting to pedal the above watercraft from the Canadian coast to Hawaii starting next month. The trip will take 40-80 days -- kind of a large window there, but whatever -- and will take Kolodziejzyk through "a treacherous stretch of open water known as the Graveyard of the Pacific, which is renown [sic] for its wild seas, unpredictable storms, and dangerous waves." OK, that sounds a little foreboding, but not all that much worse than suffering United's inevitable delays and having only 20 minutes to race through LAX to make your connecting flight. Plus this guy's gonna have calves like fucking telephone poles by the time he hits the beach at Waikiki, and you can't put a price on that.


If you're going to boat drunkenly past your neighbors pointing and nodding in time to a synthy slo-jam, this be the beat. Really, the whole soundtrack is an American treasure. (We have heard tell of the entire album being played in full before at least one Auburn game a few years back; positive confirmation of this would be grand.)  Is anyone here getting married? Because it wouldn't be the worst idea in the world to plan a wedding ceremony around this.

Orson: Stalag 17. Honor our fighting men and women who had to spend some time as guests of the enemy with a Billy Wilder thriller with feisty pacing and a tongue planted firmly in cheek at all times. For sheer masculinity you've got a clearly blasted William Holden squaring off against an unknown mole in his POW camp and Otto Preminger as his Nazi counterpart, and for intrigue there's the stage play plot relying on a lot of clever sleight-of-hand to pull the audience along with suspense alone.

The humor of the movie, though, is a fantastic kickstart change from the usual maudlin war movie, since most of the film is spent in the bunkhouse with the American POWs as they stave off boredom with mouse races, pranks on their German commander (Hogan's Heroes ripped off this film shamelessly,) and pointless but entertaining dialogue.

For the smartasses of the world, watching Stalag 17 is a pleasant reminder that you, too, have a part to play in the great wars of our time.

Happy Memorial Day weekend, and as always, thank you to those who serve in any form or uniform. Daps, one handed bro-hugs, and ONE HUNDRED COCKTAILS to each and everyone of you.