GENE CHIZIK REALLY LIKES TO GET IN THERE. WAY IN THERE

Share All sharing options for: GENE CHIZIK REALLY LIKES TO GET IN THERE. WAY IN THERE 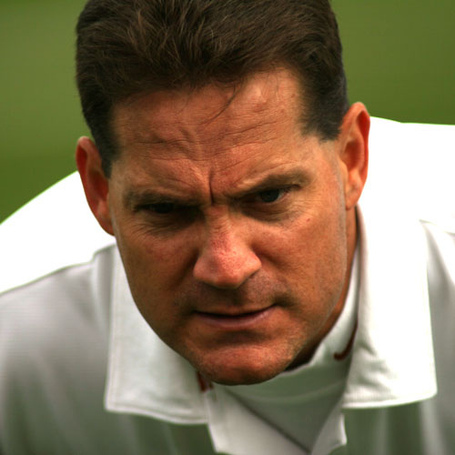 Gene Chizik likes to get in there. Way, way in there. Sometimes up to his motivational wrist, practically.

"What we love the most about Coach Chizik is that he gets in our behinds every single play -- defense, offense and special teams," Bynes said. "He’s a competitor, and we see that in him. I’m not saying that Coach Tuberville wasn’t a great coach. He was a very good coach. But Coach Chizik is more into you.

"He’s a players’ coach. He’s in the drills. He’s in our faces. He’s getting in our behinds. He’s pushy, but he’s only going to make us a better team and better players.

Other coaches save that for special occasions, but Gene Chizik understands that you have to get in their behinds on every single play, because that's the only way they're going to learn to like it. The proof is in the pudding, they say, and players agree that they love it, and keep coming back for more every time. Why? Because they like the way Gene Chizik gets in their behinds, getting practically pushy with it and really digging in there. Only through repeated and consistent attempts at getting in there can you really get them to do what you want as a coach.

Just look at that picture, man. You can tell Chizik's REALLY in that behind. Deep. Championship depth, that. Practically leaving the wristwatch of greatness up in there, man. (HT: Matt.)