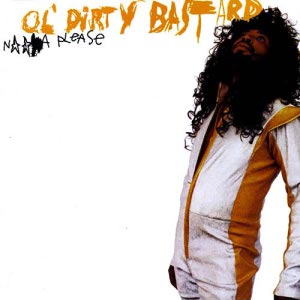 In life, sometimes you've got to grab the mike like Rabbit in 8 Mile, swallow down all the nerves and fear, and just let it fly until there's nothing left. And sometimes in life, you have to do that, and then run out the back door because you're wanted on no fewer than twelve different charges in three states, and because authorities in the building are closing in with a quickness.

Tasteless: undoubtedly. ODB's lyrics came off the top of his head, which if exposed to air would spark and smoke like sodium crackling on a lab table from the sheer force of the pharmaceuticals ODB poured into his thought-tank. This array included but was not limited to: cocaine, methamphetamine, ecstasy, any and all alcohols, PCP, marijuana, mescaline tabs, LSD, pills, more pills, oh yeah pills, inhalants, poppers, that spare bottle of rubbing alcohol if you don't mind ma'am, huffing gas, and nutmeg. (Read the Wu Bible: yeah, nutmeg, the spice that if smoked is the most terrifying, puke-tossing high imaginable. ODB thought that was Disneyland's kiddie coaster in comparison to everything else.

ODB's list of "accomplishments" is so long a proper chronicle of his exploits constitutes a federal research project expected to reach completion somewhere around 2018, so we present highlights only in hope that by showing you the tip of the berg, you can stand astonished at the mass of the ice involved here.

Objectively you cannot say Ol' Dirty Bastard was an example for anything but  a maximum stress test on one's liver, circulatory system, and forbearance in the eyes of the criminal justice system. It is simply not possible. It is also impossible to deny the man's insane zest for life. A sad chorus we offer to you:
Shimmy shimmy ya shimmy ya shimmy yay
Crack or tramadol, but not both, okay?
On to the festivities.
DRINK.

Holly:  As the weather and our own restlessness try valiantly to convince us that summer is bearing down with all haste, we turn to our bourbon-and-ginger to while away the sultry porch evenings. Booker's bourbon (anything from the Jim Beam distillery's Small Batch collection is a fine choice, really, but we're married to this'n) is the one bottle in our alkie arsenal we do not dare mix with anything. Even visiting ex-sorority sisters are implored to drink it straight. it is satiny-smooth enough even for our girlish palates, that normally demand everything come with ice, to withstand without a shudder. It WILL mix, but unless attempting a 12-hour tailgate binge we cannot recommend it. Honor it. Drink it slowly. (You may also take this as your cue to begin the annual EDSBS Felony Fuel Brown Likker Superiority Derby in the comments.)

Orson: Warm weather can only mean the palate turns its lonely eyes to [METAPHOR BREAK]
Shit, y'all. Motherfuckin' Icees should speak for themselves.

SO IMPORTANT NASA'S SENT THEM INTO SPACE TO SHOW ALIENS WHAT'S WHAT. There are only two flavors no matter what kind of fraud you might see on the third rotating spot on the machine: Coke and Cherry. If you're a savage you'll mix the two, but mixing can be dangerous. (See: ODB.)  Can you put booze in it? Does a polar bear require a space suit unless he's HOCKEYBEAR? We recommend vodka because the police can't smell it and both flavors mesh well with both, but don't forget the "plug-in" you added to the iPhone of frozen confections when your niece or nephew asks for a drink. Then again, they've got to learn alcoholism from someone, so it might as well be someone they love, trust, and will someday bail out of jail.

Orson: Watermelon. You know how we white people are about it--watermelon is one of the few football-sized objects on the planet you can finish whole without approaching Adam Richman territory, and one of like three things we really want to eat when the temperature goes above eighty degrees. Get a seedless one and you can do your best feeding frenzy impression with a few friends. Bite them for verisimilitude! They'll love it! 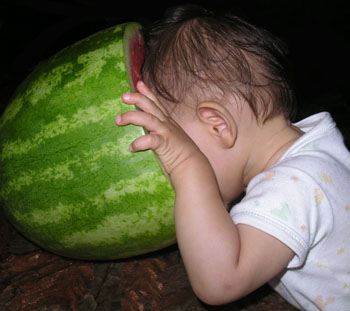 There's also those of you who, like with the ICEE, enjoy adding booze to warm weather treats. Fine with us, but inject the melon with a hypodermic needle and avoid the rookie mistake of simply cutting a hole in it, pouring it in, and allowing the precious booze to pool at the bottom. This results in an unfortunate sudden spike in drunkenness at the end of the party, which is really less of a good idea than one might think HEY DAMMIT THAT'S A VACUUM CLEANER NOT A TOY AND GET IT AWAY FROM THAT PILE OF FIRECRACKERS---

Holly:  Rosehip preserves. Did you know you can make ice cream that tastes like roses? Razzleberry Lab in my hometown does, and they swirl it with this stuff. You can then mix it with vanilla milk for a delicious creamy milkshake, add vodka, and pass out in a flowerbed some hours later and wake up smelling like roses, and not just because you've been gnawing branches in a blackout. *hic* It's good to be home.

Holly:  There are simple, universal pleasures in life that are hardwired into every living thing at birth. The desire for procreation. The need to protect one's young. And an unquenchable thirst for cars driving into fruit stands at high speed:


We held our breaths when this episode was produced for fear of having our favorite cinematic dream defiled, but fear not: Even Mythbusters acknowledges that fruit really does explode like that.

ORSON: Russian Arms Factory Explosion. It's the little floating shreds of the factory and the delayed shockwave that make it so delightful.

Life in Russia: not safe, not easy, but so fucking metal at all times.

Orson: The Repsol Truck. Sadly, only one exists, and it's in the hands of the Spanish authorities after being shipped from Spain to Argentina, run through The Dakar Rally, and then shipped back home back to its owners. 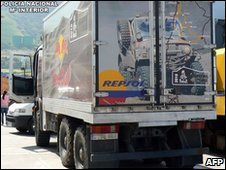 It is a rugged vehicle with four wheel drive, sport seating and suspension, and ample cargo room for a full support crew and their equipment. It also had EIGHT HUNDRED KILOS OF COCAINE IN IT, soldered neatly into false bottomed panels in the truck, meaning it's both sporty and functional. The dealer will throw in $64,000 cash, guns, hashish, and 15,000 ecstasy pills as an add-on at no cost.

Holly:  What's bigger than a 747, flies at an altitude of maybe 10 or 20 feet above the ocean, and looks like a model airplane kit that someone (George Barris, perhaps) put together without looking at the directions?


The "KM Ekranoplan," dubbed the "Caspian Sea Monster" by U.S. spies who had no idea what the hell they were looking at, rides on a cushion of air trapped between the water and its enormous stub wings; propelled by eight turbofan engines pumping out nearly twice as much thrust as a Concorde, it can tear ass across oceans in this manner at up to 300 miles an hour. We'd ride one of these down to Floribama for next week's Mullet Toss if we could.

Holly:  Backdraft. It's a Ron Howard movie, but don't let that stop you. Done up in shades of DePalma grandeur, the fact that EVERYTHING IN FRONT OF YOU IN YOUR ENTIRE FIELD OF VISION IS VERY MUCH ON FIRE obscures even his most mawkish of directorial flourishes. That the film holds up so solidly nearly two decades later is a testament to Allen Hall and his merry band of pyro techs. Just ignore all the parts where people are talking and watch EVERYTHING BE ON FIRE:


Also, the soundtrack contains a song called "The Arsonist's Waltz," which we are determined will play as we walk down the aisle at our (very eventual) wedding.

The song is nice enough, but the high pants, slippery shoes, and one-legged JB shuffling makes this a package deal. Don't break your ankles trying out the steps, but if you must then aim for the perfection at 3:18. Remember: wax those bad boys up proper-like before attempting any steps, and do so only on a hard floor without carpet. Also not necessary: Janelle's insane pompadour.