Share All sharing options for: BLATANT HOMERISM: FLORIDA'S SPRING IN REVIEW (SO BORED)

Coming To America may be a formative viewing experience for those of a certain age, both because it was looped on pay cable movie channels nonstop for three years straight and because it contained a scene where beautiful women washed Eddie Murphy's penis. 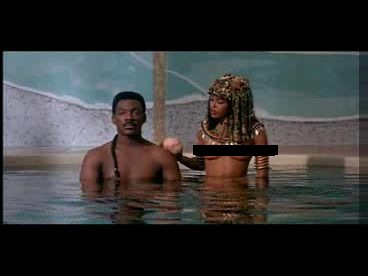 Okay, mostly because it contained a scene where the peak of wealth and success was Eddie Murphy getting his penis washed daily by beautiful women. That got old for the character, of course. As lovely as it has been to have Florida favored in every game imaginable for the past two years, the penis washing does breed an ennui relieved only by the invigorating struggle for survival in an unknown and dangerous environment. Remind us of this when the Gators lose to USF and we taste the invigoration firsthand!

Nevertheless, playing without a deep stack of chips seems to have Urban Meyer baring his teeth in a social display some might call "smiling." If he makes this gesture at you, give him a piece of food and back away slowly. Due to lack of practice or past visual data, he may be seconds away from attacking. Meyer graded Florida out at an "A" on the spring. He also allowed Chris Rainey to pour water down his back during the Orange and Blue game without sentencing him to a week of 500 pound tire flips, so while we review the knowns and known unknowns of Florida's spring, please look in Urban Meyer's eyes for the red shimmer indicating the presence of a replicant.

KNOWN KNOWNS JOHN BRANTLEY, REAL QUARTERBACK. Brantley looked laser-guided accurate all spring on short, medium, and deep throws, with every practice report containing some glowing description of his "pocket passing" and "ability to throw to multiple receivers." We don't know what these are, but they sound fascinating.

COROLLARY: HAPPY, POSSIBLY EXTANT RECEIVERS. Florida's receiving corps, if not totally settled, is at least a ten armed ball of potential exceeding the typical description of "flashes" for what they did in spring. Carl Moore flaked out and missed practices due to personal issues, but still came back for the O 'n B game and balled out with a hundred yard receiving day and a score. Personal issues and talent? We smell wideout greatness.

Omarius Hines, Frankie Hammond, and T.J. Lawrence all played well, but this spring's winner of the Dallas Baker Late Career Achiever award is Deonte Thompson, who Brantley tagged over and over again in scrimmages. Throw in Andre Debose's test runs on the fully healed hamstring, and the wide receiver position sits in far better shape than it did going into 2009.

THE SECONDARY SHOULD BE ACCEPTABLY HORRIFYING. Will Hill, Janoris Jenkins, and Ahmad Black all took the spring game off to lounge on piles of appreciative comely lasses. This is by and large a good sign: with only Haden to replace, the secondary is in far better condition than one might think. Only Adrian Bushell disappointed.

LIVESTOCK: WE HAVE IT. On both the offensive and defensive line girth is not a problem. The defensive tackle ranks only lack the proven space-eating of Lawrence Marsh, who had surgery on both hips, to claim their deepest ranks since the beginning of the 2006 season. Omar Hunter in particular was unruly in an extreme and impolite manner to his blockers this spring.

LATSKO'D. TJ Pridemore beat the shit out of people this spring, setting up what we can only hope is the return of the Latsko-back, the sliding H-back/TE/FB position occupied by Billy Latsko in 2005. Every offense is better when there's one skill player whose sole job is beating the hair off people, something he did to his teammates by getting in numerous fights in practice. We need a kill-y type on offense, and Pridemore (<----HOLY SHIT THAT LAST NAME) fits the role perfectly.

PUNTER HEY IT'S IMPORTANT. The most bankable commodity on the Florida roster may be Chas Henry. Don't laugh: He's also the third string quarterback, making him a solid fake waiting to happen and the best quick-kicking signal-caller in the SEC. Also he's avoided becoming a preppy douchebag despite being named "Chas," and good for him for that.

LINEBACKER. The general consensus from practice reports was "great improvement," but that's coming from a baseline of zero experience as a unit to "can successfully not crash play-fakes like dogs chasing a palmed tennis ball." Talent isn't the issue (see: former top tenner Jelani Jenkins) and neither is snarl (see: Jon Bostic.) Mark this in the column as an unknown, which certainly does not imply lack of immense potential.

DEFENSIVE END. Duke Lemmens dropped twenty plus pounds to move back to the outside and flew nicely off the edge this spring. This does not, however, make him an end of the quality you may be gloriously spoiled by as a Florida fan, and neither Jaye Howard nor William Green mutated into anything block-wrecking this spring. May be an "effort" position, which is a degree down from "crapping pants and rearranging blocking schemes around" defensive line ranking.

RUNNING BACK. Somehow the bag full of lightning hamsters in Florida's backfield has adopted a pit bull: Mike Gillislee, the sophomore running back lauded in these corners for a running style stolen from the graphics engine of NFL Blitz. Toss in Andre Debose, Demps, Rainey, and the perpetually injured Emmanuel Moody for the ten carries a year his body allows, and the offensive staff is going to get creative. [crickets] We said, the offensive staff is going to have to get creative. [

WE SAID STEVE ADDAZIO IS GOING TO HAVE TO GET CREATIVE DON'T YOU SEE A PUNCHLINE WHEN YOU SEE IT?

CORCH. Urban Meyer did not die on the field this spring, resign after signing day, or become a glorified AD with a whistle. He came close to attacking a reporter, played a very active role in signing the best recruiting class in school history, and barely spoke to the media.  Seems fine to us after suffering his mid-life crisis in public, especially since he's even dicking around reporters at sporting events that have nothing to do with football whatsoever.