Share All sharing options for: FULMER CUPDATE: THE BIG BOARD GOES PIRATE

The Big Board is, as always, brought to you by Brian, whose equipment is so large it prevented him from ever fulfilling his athletic potential. This did not happen to Reggie Nelson, but we all have our specialities, and in college his was running despite dragging twelve pounds of ladypost behind him. 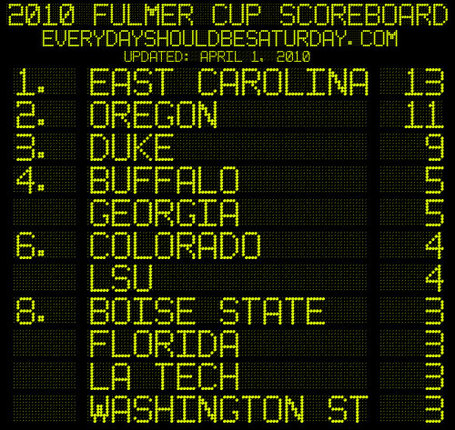 East Carolina does indeed take the lead since both Giavanni Ruffin and Brandon Jackson were charged with three misdemeanor counts each in their drunken escapades around Greenville. Did they steal the fish from a hotel fountain, place them in their bathtub, and then make replacement fish from carved vegetables? Which they then placed in the fountain, and began eating the next day in front of horrified guests, prompting them the be thrown out while screaming "YOU CAN'T TOUCH ME I'M A MUSKETEER?"

No, not at all. This was Oliver Reed, and one can't be expected to live up to the standards of the immortals. One can take the Fulmer Cup lead at a very, very early stage with exactly four outbreaks of bad public behavior, even when Ruffin McNeil gets tough and boots one of them off the team completely. ECU fans should remember that it is very early. We're not even to the fun part when players go home, rejoin the losers who never left their hometowns, and begin doing the really entertaining things like stealing trains, making money on the side by selling pesticide-laced weed by the kiloton at Gymborees, and starting bar fights in church.

(Note: if your church had a bar, we'd go to church. Add in barfights, and piety is a probability.)