Share All sharing options for: EDSBS LABS: THE ANATOMY OF DEREK DOOLEY

We're still sizing up this "Derek Dooley" thing Tennessee hired as their coach. So are Tennessee fans, we suppose. In the name of coming up with a proper way to mock him other than mentioning his nickname--"Precious"--we now allow you a special look inside the laboratories of EDSBS for a special look at the research tools we use to analyze our subjects. 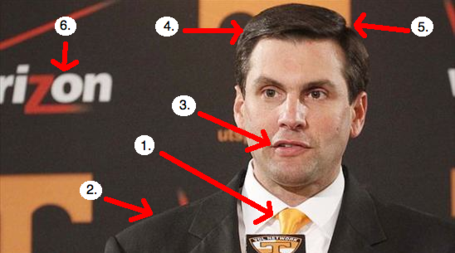 1. TIE. Good god, look at that prep school tie. That's the kind of knot only a private school kid can tie, and can tie in the dark while being pissed on and cursed at by a crew of cruel upper classmen testing his preppie mettle as he cowers at the bottom of a punji-stick-laden pit. A plush, punji-stick-laden pit with wireless and a cappuccino bar. It in itself is a crowd control device: shut the hell up, y'all, my parents paid not to send me to the shithole schools where your dim, poor children are at this moment being beaten senseless in filthy bathrooms by the linebackers from our recruiting class of 2016.

It's a work of art: tight, orange, perfectly crafted and undoubtedly tied by the man himself in a demonstration of just one of the knots they teach private school lads: The Double Windsor, the Single Swede, the Inverted Dutchman, the Quadruple Pennsylvanian Gropetangle, the Kinky Botswanan, and the Hindustani Intestine.

2. SUIT. That shit is tailored, unlike that baggy set of pajamas Lane Kiffin wore up to the podium last year. To be fair, we think Lane's was supposed to come off like this, so it's not really a good comparison. NOTE: MAKE IT ANYWAY.

3. SLIGHTLY SLANTED MOUTH. Tennessean's trust no one who actually speaks with proper enunciation or straightforward mouth musculature when speaking. All of the state's great figures speak out of one side of their mouth or another: Joe Don Baker, Johnny Cash, Elvis, Ernest, Phil Fulmer, and even Andrew Jackson, who never really spoke but instead let a sixty year long spree of killing and maiming those around him do all the talking he ever needed to do for him.

Tennesseans trust a drawler, and Dooley can do this with the best. (Fun note! This also explains Tennessean's fondness for electing stroke victims and the mentally handicapped to their public offices.)

4. HAIR. Downright Jimmy Johnson grade immobility there, with a formidable rise and buttress along the front. It looks thick and shiny, an indicator that Dooley a.) has an excellent diet and chooses his calories carefully, or b.) he has the Hi-Pro Glow, and subsists on delicious Purina products now featuring glucosamine. If you'd sailed the seas and then seen that impassable cliff rising from the horizon, you would give up hope of ever scaling its heights, and immediately begin eating your fellow crewmen.

5. THE PART. Decisive, bold, and meticulously constructed, Dooley sports a part that is the Panama Canal of hair divides. Just marvel at it: It's so big a group of tourists is currently on their way down its side on burros trying to find the bottom. Run water down it with a garden hose, charge admission, and soon spring breakers will soon begin sliding down it on foam mats.  If the rest of his hair is a helmet, the part is a clean, well-struck axe strike dislodging a perfect piece of it. If Tennessee plays like this man's hair, we SEC fans are straight screwwwwwwed.

6. PRODUCT PLACEMENT. Big NASCAR state, and people like a man who gets product placement right.