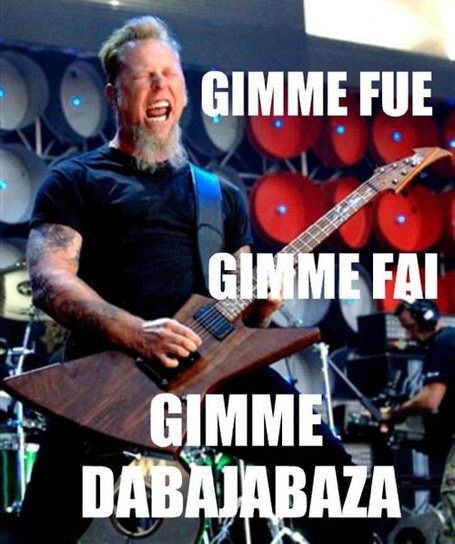 URBAN MEYER APOLOGY WATCH, DAY TWO: NO SIGHTINGS. Current diplomatic setting: JAMES HETFIELD AIN'T YOUR BITCH. Not that we're going to count this and track it, because it would be like an apocalypse calendar in that you'd die before you saw it happen.

DEAR EVERYONE PLEASE STOP STABBING EACH OTHER KTHX. Florida International running back Kendall Berry, 22, was stabbed to death last night on FIU's West Dade campus. Witnesses saw an argument outside a rec center, which then escalated into the act that ended Berry's life. Florida International has had a rough millenium football-wise, but this has to be the nadir. Condolences all around.

TENNESSEE LOSES A WEED. Derek Dooley watches another rotten tooth of the Lane Kiffin Dental Hygiene Regime fall out as Aaron Douglas, an offensive lineman Tennessee really couldn't afford to lose, announces he is leaving the program for [SOME REALLY STUPID THING LANE KIFFIN CAN BE BLAMED FOR.] Dooley announced he is "not pulling weeds...but planting grass," a metaphor which should ring true to the fescue-obsessives in the Tennessee fanbase. (That's all of them.) Thus far we know this about Precious: a.) he's good with paperwork, and b.) he likes to make analogies his fanbase can get. Stay tuned for deer urine metaphors!

OUR PUNTER'S TAKING SNAPS. FIRST RULE: DON'T PANIC. Urban Meyer's never cared much for carrying a cavalcade of quarterbacks, and even rode with a mere two during the 2006 season, but when John Brantley goes down with some kind of tropical strepthroat plague and your punter is taking spring practice snaps, hyperventilation may be the only natural reaction. Dr. Ludacris recommends cognac for your symptoms.

DON'T MISS THE IMPORTANT THING HERE: FOZZY ASCENDS TO STARTER. Sure, you could note the emphasis on the I-formation, a shift from Texas' pass-first Colt McCoy-based offense, but don't lose sight of the important thing here: the starting running back for the Longhorns next year will be named "Fozzy," which is short for "Foswhitt." Steampunk Emperor Mingo is PLEASED at this development.

HOUSTON NUTT TOTALLY TOOK A DUMP ON THE PHONE WITH THE SOLID VERBAL. Houston Nutt clearly talks from inside an echo-ey bathroom and flushes a toilet around the 9:50 mark in his talk with the Solid Verbal. Points for multi-tasking, but dammit, Houston: that's what the mute button on your phone is for. "You know what I like about okra, Dan? IT'S FAST."