HERE COMES THE BOOM. For the uninitiated, please: feel the BOOM.

Continuing fallout/evaluation/speculation/cogitation on Muschamp's hiring: he's ready from Tony Barnhart, who would never call anyone unready; Burnt Orange Nation wondering if they can pinpoint the final day of the great Mack Brown Co-Prosperity Sphere's existence; Barking Carnival paralleling our thinking that the kid's table decided to leave Texas when their share of mashed potatoes and gravy wasn't coming their way from the adults' table; and Muschamp hitting the ground trying to simultaneously talk Kirby Smart onto the staff while attempting to salvage Florida's recruiting class. (Note that Muschamp may keep on Micky Marotti, the S 'n C guy who is a player favorite and happens to be quite good at his job, too.)

And awwww wook at the widdle baby Boom.

Further links added here for formality's sake: Meyer's departure was due to health reasons, and Mack's HR situation in Austin this season sounds like a complete nightmare made worse by his mishandling of the case. Oh, and Chewbacca Noise? Chewbacca Noise, from the Muschamp thread yesterday: 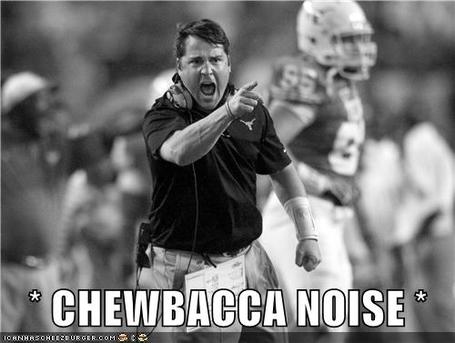 THE BOOTH FOR THE MOMENT IS EMPTY.  The position of offensive coordinator, despite Gatorsports' report that Applewhite was the pick for offensive coordinator yesterday, remains unclaimed due to some serious competition from Texas. The other candidate for the position, The Legendary Skullet himself Dana Holgorsen, is the leading candidate at Pitt, a horrible job no one wants due to the centuries-long shadow of Dave Wannstedt. Also the entire town smells like the inside of a hamburger and it's cold and in Gainesville it's warm and we have beautiful ladies wearing very little who will seriously do anything you want and OMG PLEASE IT'S THE SEC AND WE'LL OVERPAY YOU IT'S A HABIT ASK GUS MALZAHN.

LIKE A G6. Gus Malzahn has probably given verbal affirmation to Vandy that he's to be the head coach, though that's all in the air contractually speaking and until there's pen to paper this is all hypothetical and subject to Auburn-based rumors that they're going to successfully counter-bid three million dollars for a first-time head coach who was in a high school gig six years ago. Auburn doesn't even pay that much for quarterbacks, much less offensive coordinators. For anyone who's concerned about Malzahn bringing the brisk market-based approach to recruiting to Vandy, the general lore is that he's got nothing to do with it and is all X's and O's, which means Vandy should specify that he bring some recruiting muscle on staff if they're going to pay him a pimp's ransom like that.

As for the fun "Did Vandy just make a better hire than Florida?" question, it's entirely possible. It's also possible that we're typing this from your mother's pants. It's roomy in here! [echo echo echo]

PLEASE NAME THE LOCKER ROOM SHOWERS AFTER HIM BECAUSE GET IT HAHAHAHA. Al Golden will be the new hire at Miami. He won at Temple despite never beating a MAC team with a winning record, but any critiques of his record still go back to "Temple. He won at Temple. [STARES.]" The general consensus is that he's a charming lummox with a relentless recruiting gland, a fondness for power football, and a penchant for wearing ties. SCHNELLY TWO POINT OH. It's a fine hire, and those who suggest Miami should have gone with something more splashy clearly don't know that this is not 1995. Now take off those fat pants. Now.

THE MOST EPIC CYBEX PIMPIN' EVER. Al Golden also once benched hard to the Final Countdown. This video, btw, was the entire resume Al Golden submitted for the Miami job. We would have given him the job twice for it.

BECAUSE THIS IS VERY IMPORTANT. Northern Illinois will replace Jerry Kill with Dave Doeren, Wisconsin's defensive coordinator. In keeping with school tradition, Doeren will change his name to Hammerdick Manslaughter.

WHY NOT LEACH? Because elephants are majestic and make horrible pets, of course.