TEXAS FINDS OUT WHY YOU DON'T SKIMP ON THE STATUE BUDGET

Share All sharing options for: TEXAS FINDS OUT WHY YOU DON'T SKIMP ON THE STATUE BUDGET

THIS HAS BEEN UPDATED CHECK BOTTOM KTHX

Follow the lead of Alabama, University of Texas: never, ever skimp on the statue budget. Never. You have no idea how badly you can get burned spending less than top dollar for statues, and how bad it can turn out if you opt for the bargain stuff. For instance, you might get "Giant Weeping Masonic Vagina" if you commission the cheap stuff, and unless you're constructing a metaphorical homage to the Glen Mason era at Minnesota, you probably want to avoid doing that.

What happens when you skimp on the statue budget? You hire low-budget Asian artisans to sculpt African-American athletes. A work order goes through the intertubes to a hot warehouse in Manila. A dude gets the order, and sees pictures of Vince Young, and then opts through one of the two models for African-American faces the average Asian dude has on the mainframe: CODE: Decision= [TIGER WOODS] read [MICHAEL JORDAN] (opt) * (execute)

(He smokes two cigarettes at once, throws the work order into the bin, and then goes to a massage parlor for the afternoon. Manila is awesome.)

If this is too much, they will just sculpt a white dude, and then paint him black, especially if you're really lowballing and not even spending the money to have something sculpted, but instead go for the fiberglass figures you'd see on an old-school McDonald's playground or horrendous third world children's park, the kind that features two hazardous tilt-a-whirls spitting bolts with each run of the machine, an exotic animal kept in a concrete jail who appears to be begging for death with each look of its plaintive, fear-stricken eyes, and a dodgy array of street food guaranteed to fly through your tailpipe in less than two hours from ingestion to expulsion.

The results are fantastic! Awful! Both? Both! Both. AAAAAAAAHHHH GOD-- 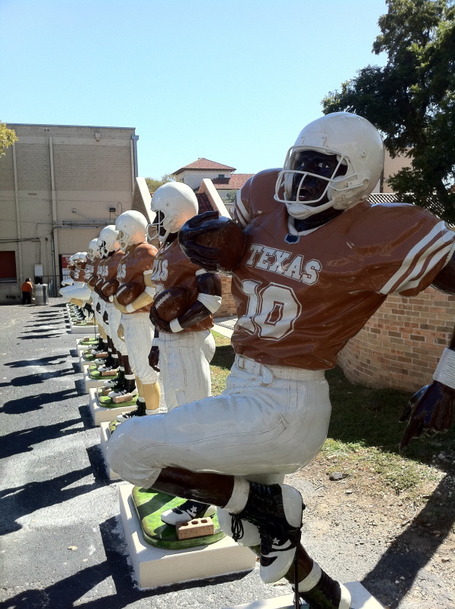 Bojangles O'Blackface, seen here running from racist SWC cornerbacks, is just one of the more horrific selections from a generally terrifying collection of fiberglass phantasms making up the Legend's Walk, a former parking area now devoted to making children cry and giving something for really stoned students wandering the campus late at night to be terrified of in the dark. Darrell Royal's statue looks like a Thunderbird, so we will assume that Kirk Cousins, fellow Gerry Anderson Supermarionation Model, is the bastard son of this statue. He doesn't show much emotion, son, but rest assured: he loves you.

(You can just go ahead and assume Greg Davis was in charge of all of this. This year, it would feel so right, Texas fans.)

UPDATE: This is a production of the University Co-Op Bookstore, not the university itself. You can still blame Greg Davis if you like, however.

DOUBLE UPDATE WHOA: The statues were produced by an amazing Filipino company called Asian Replicas. A few of their fine pieces follow after their jump, and after viewing them you'll understand why they were the contractor of choice here. 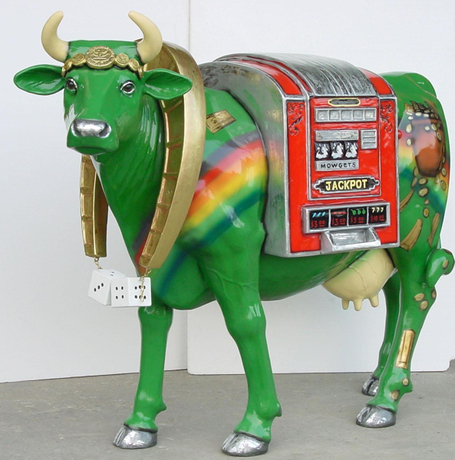 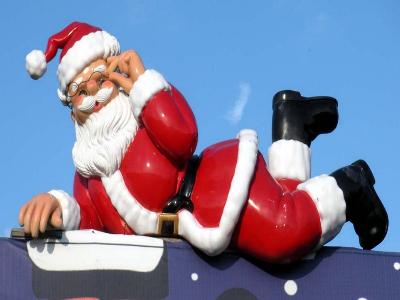