Share All sharing options for: BOISE STATE: BUS. (ON FIRE.) 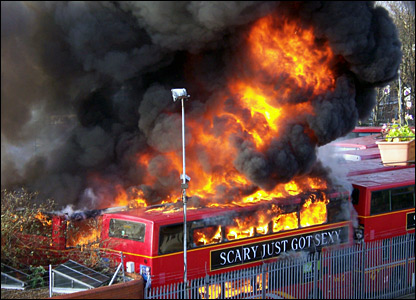 Scary best be sexy to you, because the bus is on fire whether you like it or not. We passed out last night with Boise up 24-7 since we'd been up since 3:30 a.m., were quite tired, and had consumed exactly two beers, aka "two few to start a proper streak, and two too many to stay awake."

We woke up in our clothes with the laptop on the floor and Boise's Kyle Brotzman's body in the closet. A quick check: wounds, all self-inflicted and of a dramatic variety and number. We're just going to close the door and leave it there. Most people just leave a few bucks for the cleaning lady, but if we leave five grand on the dresser, some rope, a tub of lye and a hacksaw, they'll get the message, right? Right?

We went back and watched the replay this morning, and you owe it to yourself--if you missed the second comeback-of-the-year to happen on the same day--to go watch it. It plays out a lot like watching a survival drama. First, the wolves are in check, and suddenly they're not, and with two matches left and a pile of wet firewood in front of them Boise mis-strikes one, and then another, and now there they are, just lying on the snow while glowing eyes and teeth creep in for the kill. Just imagine Kellen Moore now: but it feels so warm out here [SNARL SNARL RIP SNARL]

In short, tactically Nevada ground them to a nub in the second half and moved their pass rush around when Boise, unable and unwilling to run with a lead, continued to fire blanks into the Nevada secondary. In a game of tiny margins, four mattered:

Never, ever go to sleep. You wake up, and there's buses on fire all over the place, and explaining all of it takes way too much time, since in the end is all you remember is the fire and the screaming. At least, that's all Boise will remember while the world nods and smugly notes this is how it was supposed to be all along, which we all know is a truth built from the easy comfort of an instant and very present replay.

In reality the danger is there on every play in a game, and both teams take turns placing each other on the chopping block. Last night, Nevada-a good, fearless, and indefatigible Nevada team--walked away with the axe but had its near misses marked in fine nicks on the back of its neck. Boise didn't, and now we'll all just call it what a lot of executions get called: justice, the most revered fiction of all.