An apartment. Assassin and sex man Gene Chizki wakes up from a night of hot sex and murder, because all Gene Chizki does is hot sex and murder. Trooper Taylor is passed out on the couch. He is covered only by a single white towel.Chizki's hot girlfriend Lawder Thunderpants lies next to him.

Chizki: I'm not hungover. I'm hung, and you're over.

Mullenox: Oh, I don't think I'm the one with the hangover this morning, Chizki. I just sent you a picture of the party we had for you last night. Don't you remember? Its was a...heartwarming affair. 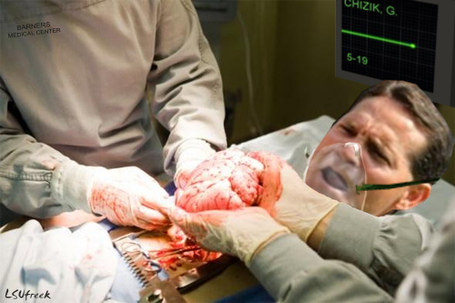 Chizki drops his phone and collapses to the floor.

[CAMERA BLURS AND FADES TO BLACK]

The camera opens on Chizki in a hospital. DR. MILES walks in, eating a bowl full of greens.

Chizki: I eat meat and bullets.

Chizki: What the fuck happened?

Dr. Miles: Here, lemme read the chart...ah, so you're opting for the full hysterectomy.

Dr. Miles: This says you've been given the Albert Means cocktail. Oh, and someone took your heart. I'll have to see if someone put a new one in there, because if not, then woo golly, I'm gonna be real confused now.

Chizki: I've got to get moving.

Dr. Miles: That's right! Wait, no. You're not supposed to leave.

Dr. Miles: You've got to keep your heartrate up.

Chizki: Well, that's why we don't have a defense, Doc.

Dr. Miles: As someone familiar with pulling things from my ass, that's quite a feat. First rate work there, lady.

Chizki nudges toward the heart paddles.

Dr. Miles: Those? Oh, I don't even know what those do. Well, besides make the most delicious pressed sandwiches I've ever tasted.

Chizki: Press the switch. Let's do this. 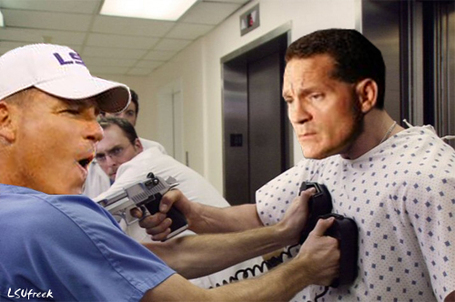 Dr. Miles: YOU ARE ONE CRAZY LADY.

Chizki runs down the street in a hospital gown punching men, women, and pets.

Rev. Richt: Why, how can I help you sir?

Rev. Richt: Why, certainly we can find a better way to do this.

Chizki: No questions! Just fight me!

Rev. Richt: I'm a peaceful man, sir. Surely I can just grant you some spirited competition, and then make my way to the Capital One Bowl or something.

Chizki: NO DAMMIT THERE'S NO TIME.

Chizki gets weak, slumps to the ground clutching his chest.

Richt: Well, yes, I suppose that would work.

Mike Bobo chimes in from the backseat.

Bobo: Attach it to his clothes! He'll never see it coming, and that's why you should do it!

Richt. There you go. 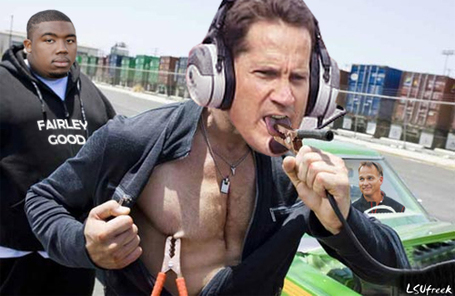 Chizki: YOU'RE DAMN RIGHT IT IS.

Mark Richt turns the ignition Chizki convulses as current sears through his body.

Richt: Well, how'd that work? You can thank the power of a Ford Truck for that. Tell 'em about it, Kathryn--

Chizki: Can the sales pitch. Give 'em his thank you, Fairley.

Fairley dives headfirst into the small of Richt's back and paralyzes him.

Chizki, fresh off killing like forty-eight people in a single fight scene just to feel alive, is running through Chinatown. His chest pounds; pain radiates through his body. He collapses at the feet of a short, intense-looking woman.

Woman: Oh dear. Are you alright?

Woman: But there's a bus full of Asian tourists right here. I've seen the internet. Surely one of them will do it. They'll also probably cry the whole time if you want them to, as well.

They tussle. She resists at first, but resistance is overcome by animal passion and the irresistible appeal of his velour tracksuit. Soon, they are making the love on the newspaper stand in front of a crowd of cheering Asians. 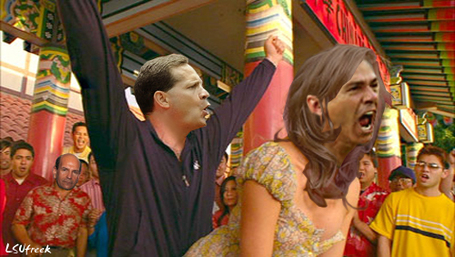 Chizki has tracked down MULLENOX, who attempts to escape in his super secret helicopter which can fly in space with open doors. Chizki fights him on the helicopter, and the two fall out in a deathly embrace. They don't kiss, because that would be gay. Chizki breaks his neck.

Chizki: That's what I call lack of institutional control, MULLENOX!

Chizki then realizes he is falling from space to the earth without a parachute. He grabs his phone. 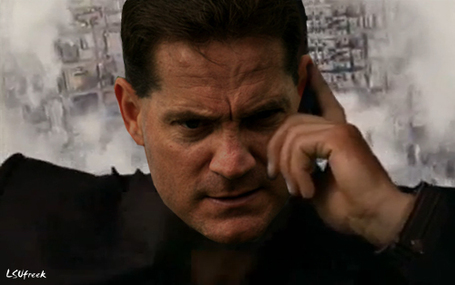 Chizki grabs his phone and dials.

Chizki: Hey doll, looks like I let you down again. It's like all my life I've just been going, going, going, usually coming out somewhere around .500. Wish I'd taken more time to stop and smell the roses so to speak.  Guess it's too late for that now. You're the greatest, baby. I mean, Bobby.

Chizki hits the roof of the Georgia Dome, bounces, and lands in a bloody heap on the floor of the SEC Championship Game.