MAD WAGERIN', WEEK SIX: BACK TO THE SALT MINE

Share All sharing options for: MAD WAGERIN', WEEK SIX: BACK TO THE SALT MINE

Peter from Cleveland Frowns has your wagers for the weekend ready below. Follow him on Twitter at @clevelandfrowns, and happy wagering.

One thing I might have been clearer about at the beginning is that I'm writing about real wagers here. Sometimes folks are able to talk me off of a play, but for the most part, the plays and units and I recommend here are the plays and units I wager in real life (remember, a unit is a percentage of the season's bankroll). The reason it's important for me to be clear about this today isn't that I'm sure you're getting tired of the "Early weeks are for ingratiating"/"Mood: Recumbent" bit and the 2-3 and 2-2-1 weeks that go with it. It's that I have to eat too, and if the picks aren't doing the job, I have no real choice but to drag myself back to the salt mine to toil for an hourly wage.

Salt mine, gold mine, whatever. Jerry Reed is appropriate for all situations.

Now think -- I won't cry over any specific drop of spilled milk here, but just think -- of how small the difference can be between 2-2-1 and 3-1-1 when it comes to it all playing out on the field on Saturday, and how those small differences on the field correspond to the smallness of the things you might have missed (or noticed) in making a certain play. Then think of how enormous these same differences are when you're trudging off to the mine on Monday.

Which is to say recumbency doesn't describe anything going on here this week. And if you're tempted to view the following slate of action as desperate, you should consider that there's probably nothing like the thick dry air of the salt mine to help focus on how the really small differences become really big ones. Head in the clouds, feet on the ground. Good judgment comes from experience. Experience comes from bad judgment. These are things I've always said.

Also, a week in the mine leaves less time for writing, which is just more realness about a column on real wagers.

South Carolina +7 over Alabama (10 Units (COUNT 'EM)) (3:35 PM ET, CBS): Taking the runaway meme of the week head on here. First, something of a detour to note that no less than Barnhart, Feldman and Hinton each said the same strange thing this week in respective pieces on Alabama's inevitability:

"[L]ook at the Alabama schedule and tell me who is going to beat them? Auburn is a candidate but that game is in Tuscaloosa." -Barnhart

"... Auburn ... a top-10 team and the team that looks like it has the best shot at stopping the Bama train." -Feldman

"Auburn's matriculation into the top 10 this week makes the Tigers by far the most dangerous test over the last seven games (or even eight, if you count the SEC Championship), and obviously the most intriguing." -Hinton

So Auburn's a candidate to beat Alabama in Tuscaloosa, but Sakerlina isn't, even though they get Bama at home. Auburn's "by far more dangerous" than a Gamecocks unit that Auburn needed four second-half turnovers to beat at home by only one score.

It looks like the Cocks are flying low coming off a battle on the Plains that had to be one to grow on. The offensive line was banged-up going into that one so the bye-week should help a lot. An extra week for everyone to understand just what kind of person Stephen Garcia is can only help, too.

But the best angle here is that everybody's crowning Alabama in response to a win over Florida that by first-hand accounts had a lot less to do with Alabama than it did with other things:

"[Meth] is a part of who we are and that won't change."  -Steve Addazio

So now we're getting puff-pieces on the Tide secondary and the sophomore cornerbacks who lead it.

If it's hard to repeat as BCS champion, this has to be why. Remember how high Stanford was flying into last Saturday? Meanwhile, the best Sakerlina team of the Spurrier era can save a season with a win on Saturday.

Michigan -4 over Michigan State (2 units) (3:35 ET, ABC): There's never been a more Denarded point spread than this. Nobody doesn't know about the D3 schedule Michigan's played so far, nobody thinks Michigan's defense will stop the Spartans (who just beat Wisconsin), and all but a tiny feeble minority is badly suffering from Denard fatigue, mouths watering for comeuppance on Saturday. So could be going on here? Someone might know something about a Michigan defense that's ready to step up. And for me, this is at least partly a hedge. For just one unit it's not really worth subjecting myself to the potential of the pain of losing a spite play like this. (Tie your fucking shoes.) But I've also been thinking of Denard and Michael Vick.

True Story: I was a senior in college in 1999 and caught one of Virginia Tech's early games that season, was blown away by Vick, so checked the odds to see that the Hokies were 65-1 longshots to win the BCS title. I called my homeboy Smitty about this, specifically about getting to Vegas with $200 for a play on the Hokies that would have paid $13,000 if it came through. Smitty laughed and told me he'd just hold the action for me, which of course was suspect because Smitty didn't have $13,000, or really anything close to that. But he did have a Michael Jordan rookie card and a bunch of others that I'd have been glad to take from him along with having a personal valet for a couple years, and there was no real way I was going to get to Vegas then anyway, so I said fine.

The problem here, I learned the hard way, was that I had no way to realize the greatest benefit to a long shot play like this, which is that close actually counts with these. Because of my special arrangement with Smitty, there was no real way for me to hedge when Virginia Tech ended up playing Florida State in the title game. If I'd had a sports book ticket, I could have come in with a money line play on the Seminoles to guarantee myself at least $5,000 or so. Instead, Smitty shows up at my house a few weeks after the game to give me this: 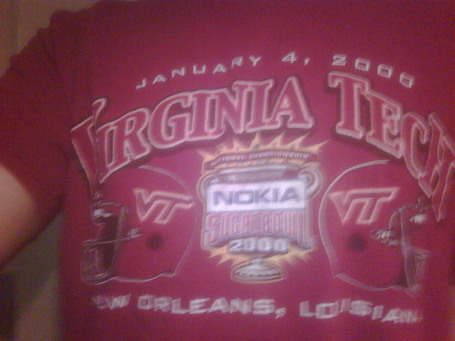 Miami -6 over Florida State (1 unit) (7:35 PM ET, ABC): Randy Shannon's Twitter ban has been the catch of the year so far around here.

That's all for this week. Akron v. Kent is the one that got away. Your feedback on these and the rest is necessary as always (special thanks to Jimmyb2003 who dropped unheeded wisdom that could have landed us with a perfect slate last week). Thanks.