Share All sharing options for: THE CFB BUYERS' GUIDE: COORDINATORS

Every Tuesday morning, we at EDSBS head over to the award-winning research labs at Consumers Union -- frequently having to crawl out from under the wreckage of our crushed hopes and dreams to do so -- and partner with CU to put some aspect of the college football experience through a rigorous testing regimen. This week: Coordinators may not be front and center in your program's household, but they play an integral role in ensuring that things run smoothly. Which ones are worthy of your hard-earned dollar? 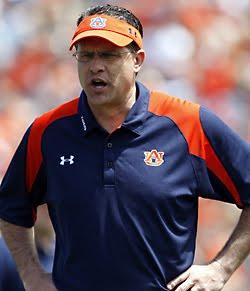 GUS MALZAHN (OC, AUBURN) | ■ ■ ■ ■ ■
Highs: Transforms even dried-out slabs of meat into substantial, satisfying spreads; an absolute berserker at NCAA 2K11.
Lows: Can't possibly be satisfied remaining a second fiddle for much longer.
A year ago, ex-Arkansas golden boy Malzahn took Chris Todd, who by then had been written off as Brandon Cox without the charisma or athleticism, and turned him into the SEC's third most efficient passer. So perhaps it shouldn't come as any surprise that, given a QB who's basically an Ent with an RPG launcher for an arm, Malzahn could further refine the Auburn offense into a machine of even more elegant ruthlessness. If you saw the way Malzahn's Tigers shelled a supposedly improved Arkansas defense in last week's WACesque 65-43 shootout, you'd see why people are comparing his offense to the first atom bombs the U.S. dropped on Hiroshima and Nagasaki -- it is an instrument of destruction that's almost horrifically beautiful, and it's actually kind of cool to watch . . . as long as it's happening to someone else. Enjoy this while you can, Auburn fans, for Malzahn is almost certainly gone after either this season or next, at which point you'll be left with Gene Chizik and a stable of ridiculously well-compensated position coaches. But until then, Malzahn is a can't-miss proposition that would be a steal at any price. 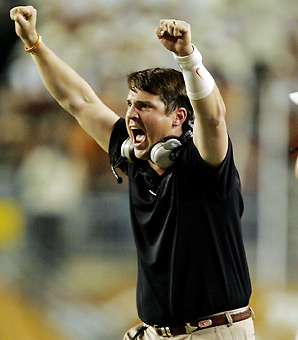 WILL MUSCHAMP (DC, TEXAS) | ■ ■ ■ ■ ½Highs: High energy level, top-notch reliability scores, also grills a mean steak.Lows: Extremely high price; loud, profane alert signals may make him unsuitable for households with children.Texas has a first-year starter at QB, a substantially reworked offensive line, and a running game that for three years now has kind of been like the sailboat (or schooner, if you'd rather) in a Magic Eye picture: You know it should be there, but damned if you can find it. Yet the Longhorns are still hanging in there at 4-2 and just bitchmade a top-10 Nebraska team on the road. How? Because Will Muschamp's defense is everything it's cracked up to be and then some. It's no wonder that Muschamp continues to be one of the most sought-after brands in the industry, despite a price tag that should send the average customer running for the hills. It's going to take an elite-level opportunity and a whole lot of coin to drag this guy away from his position as coach-in-waiting with the 'Horns, but the buyer who manages to do so is almost certain to be richly rewarded -- as long as they can put up with the occasional F-bomb as the price of success. 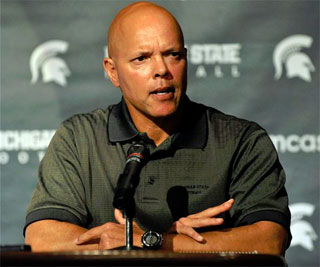 DON TREADWELL (OC, MICHIGAN STATE) | ■ ■ ■ ■ □
Highs: Hard-working, versatile, handles tough jobs with ease.Lows: Not much flash, some buyers may not recognize the brand name.No, you've never heard of this guy, but chances are you're familiar with his work. Not only is he the coordinator of the second most productive offense in the Big Ten, he effectively assumed head-coaching responsibilities for the two weeks immediately following Mark Dantonio's octuple-bypass surgery with a cardiac-catheterization chaser or whatever the hell it was he had done following the win at Notre Dame. That included a convincing win over the Wisconsin team that just stunned everyone by pile-driving then-top-ranked Ohio State, so yeah, it's safe to assume this unit can be counted on to run the show. The lack of a recognizable brand name may give some buyers pause, but if what you're looking for is a versatile unit that can handle tough jobs on short notice, you could do much, much worse. 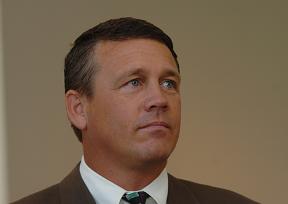 MARK SNYDER (DC, SOUTH FLORIDA) | ■ ■ ■ □ □Highs: Strong track record, does an admirable job with cut-rate parts.Lows: Speed not his forte; weak defrost setting.Wasn't this the guy who got fired from his job as Marshall's head coach last year? Well, erm, yes. But he was also Jim Tressel's DC during Sweatervest's salad days at Ohio State, and despite arriving to what was not exactly a stocked cupboard when he took the DC job at USF, the Bulls' defense has been . . . not half bad, actually, under his tutelage. Not that they've played a schedule worth giving half a crap about so far, and if they're not already looking back and wondering how in the holy crap they gave up 38 points to this year's Gators, well, they will be by the end of the season. But even with that rout factored in, they're giving up fewer than 24 points per game, and if you've seen South Florida's offense this year, you'd agree that the D is the only reason they've won any games at all. Maybe our biggest caveat is for buyers to be cautious about jumping on board with any unit carrying the USF brand name right now, as the team as a whole seems equally likely to win this year's cesspool of a Big East or go 4-8. 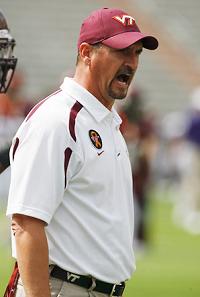 BUD FOSTER (DC, VIRGINIA TECH) | ■ ■ ½ □ □
Highs: No-nonsense work ethic, cooks up fantastic turnovers.Lows: Getting on in years and starting to be eclipsed by newer, more innovative units.There was a time when we never would've imagined ranking a Virginia Tech product this far down the list. Tech, after all, is the birthplace of "BeamerBall," where "offense" was something that only occurred when they managed to get a Vick on the roster every three or four years, and the rest of the time they just depended on the defense and special teams to dickpunch opposing teams into giving up inexplicable points. But BeamerBall hasn't been quite so ballin' lately, and perhaps it's time to humbly suggest that the Hokies take this venerable product back into the R&D lab for some long-overdue tweaks. A recommitment to the concept of pass defense would be nice, as would a setting to stop (or at least contain) the spread attacks that have become increasingly popular. Otherwise what you're looking at is a team that can be counted on to do an OK job of representing the ACC in the Chick-fil-A Bowl each year but not much more, and that no longer cuts it in this competitive class. 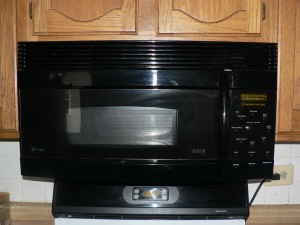 GE ADVANTIUM 120 | ■ ■ □ □ □Highs: Most capacious of any of the units we tested, speedy yet efficient cooking.Lows: Subpar repair record, easily outwitted by stunting and corner blitzes.We had high hopes for this sleek, modern product -- perhaps a little too high. After all, we pitted it against Monte Kiffin's USC defense in an informal scrimmage at the CU labs and it still managed to score 37 points, so we figured it had to be doing something right. But the 900-watt version of the Advantium just couldn't keep going for a full 12- or 13-game season, and that lack of durability is a major mark against it, as is its inability to handle repeated blitzing by even a marginally competent defensive front. A dedicated "popcorn" setting is a fun thing to have, but its archaic, easily beatable pass-protection schemes mean the popcorn might be the only thing that's not getting burned on any given play. Value-packed and a speedy performer, but has too many deficiencies to be called an elite member of this market segment. 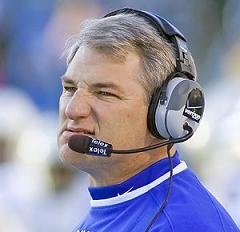 TED ROOF (DC, AUBURN) | ■ ½ □ □ □Highs: Decent pass coverage, variety of settings.Lows: Get that extended warranty, as it's been known to run out of juice after one year.If there's any justice in this world, Roof is washing and waxing Gus Malzahn's car every Sunday, and -- though we don't condone anything that might give the appearance of improper benefits to the NCAA -- Cam Newton's as well. Because let's face it, without those two guys, Auburn is just another .500 team with an OK running game that can't seem to keep from giving up 30 points a game. Roof's track record is well established in this category: It'll give solid service for a year or so, enough to make you think you've got a product you can really depend on, and then it starts blowing fuses and shooting sparks across the house the minute the warranty expires or it signs a contract extension, whichever comes first. Avoid unless you've got other units in your home that can pick up the slack when it inevitably starts to go on the fritz. 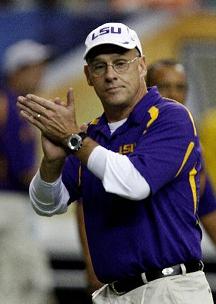 GARY CROWTON (DC, LSU) | ■ □ □ □ □Highs: Entertaining, if nothing else. Somehow manages to keep winning in spite of itself.Lows: Quarterbacks repeatedly come out half-baked and unsatisfying; looks disturbingly like John Malkovich.Perhaps Crowton doesn't belong in this category to begin with -- he's really more of a processor than a coordinator. Running game taking up too much space in your refrigerator? Here, he'll cut that thing down to size! Watch in amazement as he transforms Jordan Jefferson into Reggie Ball! While Crowton may be a fun, kitschy accessory to keep around for parties, though, we can't imagine keeping him around for serious household duties. Only experts with plenty of time to kill need to bother with this one; if you're not in the habit of working miracles or prying victory from the jaws of defeat, Crowton will only give you years of frustration and cardiac incidents. 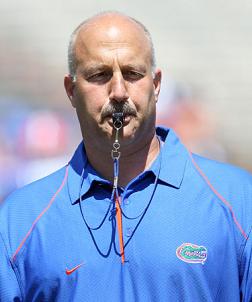 STEVE ADDAZIO (OC, FLORIDA) | XWhat we've got here is a perfectly dependable unit that has been loaded up with features and marketed well beyond its limited capabilities. It's one thing to put together a solid offensive line that stays fresh for weeks, a task Addazio can handle with ease. But for some reason the upper-level marketing execs at Florida decided it was time to move him up in the world and try to sell him as a spread guru, and the results have been disastrous. Try to put together a speedy outside running game and it'll give you a two-yard run up the middle every time, and god forbid you ask it for a consistent passing attack -- it'll try over and over again to cram a pocket passer into a spread system and throw out an inscrutable "ERROR" message every time, as if you're the one who did something wrong. It's gotten to the point where the entire Florida offense has turned into a fire hazard, and that's the kind of thing we absolutely can't recommend. Until the Gator brand recognizes this product's limitations and stop trying to make it something it's not, we have no choice but to give it our Not Acceptable rating.