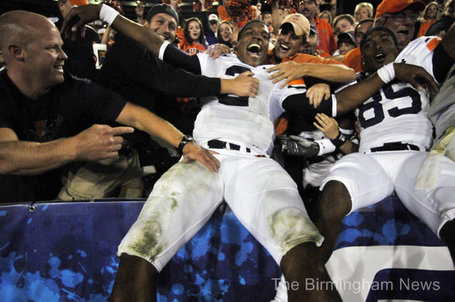 Cam Newton really should be getting more attention. Auburn is slightly off the map of American Cultural Consciousness, but it's certainly not a complete backwater--they've got a Starbucks now, and a Lowe's, and all of the amenities of any American exurb as any Auburn/Opelika resident will tell you. They also have a quarterback who already has 1810 yards and 21 TDs of total offense all by his lonesome, and who won't get the Tom Rinaldi Tone Poem Treatment---

--because he made an ill-advised purchase of a laptop, and then threw it out a window, and perhaps because he's not as ready-made packaged media food as Tebow. (I.e., the prayerful Great White Hope, long may his name be praised.)

That shouldn't eclipse his thundering rip through SEC defenses this year, though, nor should it prevent the ladies and, if the photo is to be believed, the men of Auburn from loving him with a passion that dares speak its name from the rooftops. Say it with us, Auburn: "We love having a universe-destroying battering ram who falls forward six yards at a time at quarterback who sometimes hits wide receivers with his passes, and who sometimes throws 120 mph artillery lobs through the fragile chests of honored but fatally injured spectators."

Caress his upper thighs while you may, for it is not gay if it is with Cam Newton. There's precedent for this, and it is canonical law.