Welcome to Aggro-Tourism, EDSBS's roaming safari tour of all those foreign cultures that spring up on fall Saturdays, right here in America. Now playing: The Colorado Buffaloes. 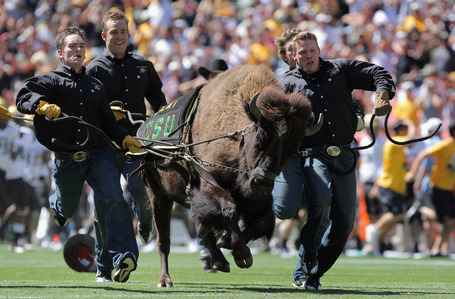 We have to recommend a trip to Colorado at all costs, for any fan of the game, based on the sole reason that their mascot is a live buffalo that is led out of a pen, into the stadium, and barrels around the field for the enjoyment of a crowd that really is idly hoping she'll trample someone. Folsom Field is backdropped by the Flatirons, which are rocks, not steaks, and is one of the few places in college football where you can continue to enjoy the natural wonders of the surrounding area even while inside the stadium. (We are speaking here of mountains, but also of ladies, yes. The first guy we interviewed this week said, "Colorado football is: One, Ralphie. Two, Sluts." )

Speaking of the ladies: They make t-shirt dresses. This is a thing. If you are into the bedazzling of the human form, show up crafty: 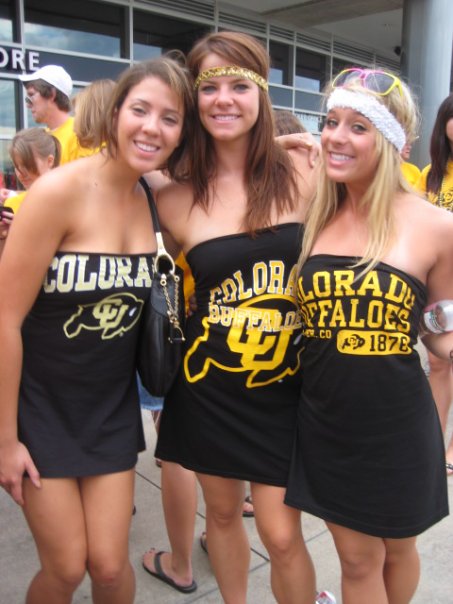 For guys, well ... we asked, and got back, "All we wear is party anyways." [smoke clouds not seen but strongly implied]

You will find this attitude pervasive, and Buffs fans are equally accepting of their team's woefulness and living up to their own stereotypes:

Never have the Buffs sold out all the games on their home schedule, not even in the "Sal Anese knocked up the coach's daughter and we stole a national title along the way" glory days.  But oh how the locals wish it were still 1990 like the guys from Warrant wish it was 1990.

Georgia fans and other SEC partisans used to a highly-organized gameday operation may find themselves a bit befuddled:

As a Floridian relocated to Colorado in September a few years back, I asked folks about "gameday traffic" while going to Rocky Mountain National Park one Saturday, and the responses I got were all mystified blank looks.  There is no concept of "gamedays" here in Colorado, be they for the Rams in Fort Collins, the Buffs in Boulder or Air Force in the Springs.  3 D-1 programs separated by 100 miles or so, all bathed in the same apathy.

Parking around here can be a nightmare. Learn from our bodies on the ground:

Real talk: the far greater danger for visitors is the Boulder police dinging you for a parking/driving violation. 5-0's are earnest on that front, especially to those unfamiliar with the area. Drive safe and slow and park respectably and legally, y'all.

Try to find a spot on the HIll, or park on 19th and Arapahoe where a hidden set of stairs leads you right to Folsom Field; you have to come prepared for quite a hike, though.

For optimal parking near the stadium snag a spot at Naropa University's lots or in the nearby empty fields. You end up in the shadow of the stadium for way less than other spots, and it's an easy jaunt up the hill to the entrances.

Where to go once you get there:

Before the game, your best bet to get tanked is the Tailgates in Franklin Field directly east of the Stadium, or Farrand Field, a bit South on Campus. Franklin is the home of the the proletariat pre-game drinking. On the other hand, if you want to get drunk with rich people in tricked out service vehicles, Farrand field is the best. Farrand field is also home to the marching band, many a sunbathing lass, and Frisbee.

And when to leave:

For those who like to wander into the stadium a wee-bit late to the opening kickoff: don't. One of the most unique and enjoyable scenes in all of college football is to watch the trainers of Ralphie the Buffalo be dragged about the field by the titular live-action mascot in the pre-game hype. The current iteration of Ralphie (#5 to be precise) is a notably muscular strain and most times at least 1-2 student handlers are left tumbling in her wake.

Her handlers -- the guys wearing the jeans and cowboys hats -- are better conditioned than some of the players on the football team. They have to hit some pretty strict physical benchmarks to be allowed to run with her (if I recall, they're timed on an 80-yard dash).

As for liquor, well, it doesn't matter as long as it's being consumed off a shot-ski: 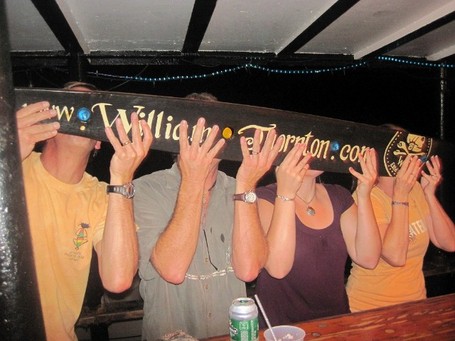 TALES OF INTEREST. (anonymized to protect the current university employees in our midst)

In 2005, while losing to Nebraska, The kid in front of me threw his cup of dip at the field.  The vision of the cup floating majestically in the air while on its path straight to a cheerleader's head will never leave me.

I attended a CU-KU game last year where a gentleman manned his pre-game station proudly flying a FIU flag above all others. No, even in Boulder, that doesn't make sense.

If Manhattan maintained the same dispensary-per-capita levels as Boulder, they'd have close to 200 of them, and Manhattan has 9 McDonalds.

Many years ago, CU had traditional halftime marshmallow fights. Students would sneak in bags of marshmallows and throw them at each other at halftime. Eventually, the university's leadership began to crack down on the fights, because apparently, people were putting batteries and rocks inside their marshmallows.

Please don't take it as legal advice, but I once saw a man ask a squad-car where he could find some ganja and was met with the response of laughter from the car as it chose to drive on.

Thanks very much to our intrepid Colorado correspondents: Jon and Ryan at Ralphie Report, HashiellDammit, Lauren Guillory, RicardoMontalban, 303Buff, Stewballs, and KG from Denver.