Share All sharing options for: OREGON KICKER IN STABLE CONDITION AFTER FIGHT

Dumbass friends can cost you. We had an acquaintance one time--let's call him the Scarlet Hipsternel--who, though from rural Tennessee, labored under the illusion of being Alex in A Clockwork Orange crossed with the dude from Blow-Up. He subscribed to the notion of "Having your friend's back in a fight" as a universal principle, and not something a friend had to earn.

This is important, because you undoubtedly have friend who, like a few of ours, have a few drinks and instantly begin looking for an excuse to "throw down," which in drunk terms means "take one cheap shot, be pulled apart by bouncers, and then act like you still want to fight as you're thrown out of the bar." This guy ended up with a jaw wired shut when, while "backing up a buddy," he was "hit in the face with brass knuckles." Dinner tasted great through a straw for six weeks, but HE BACKED UP HIS BRO, BRO.

So let that be a cautionary tale, but not as bad as it could have been. You could be Oregon's kicker Rob Beard, who ended up on the wrong side of intervening in a fight on Sunday morning. (Click the photo to go to the video, which was autoplay and DIE AUTOPLAY VIDEO DIE.) 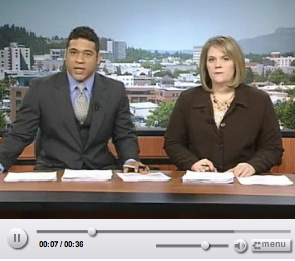 Beard was reportedly kicked in the head until unconscious, and is in stable condition at a local hospital. All due good wishes his way, and let this be a reminder to carefully re-evaluate your decision to back up your bros in battle, because while looking out for your friends is certainly important, so is basic math. Unless you're Mike Vallely it's simply not a good idea.