It’s a long offeseason. The Digital Viking: The EDSBS Guide To Spicy Living is here to help. The four categories are Drink (obvious), Comestibles (Food/Snack), Combustible (Shit what blows up), and Canon (essential films, books, and movies to understand reality as you know it.) A patron saint will be invoked to protect us in our travels. Enjoy.

Patron Saint: Doug Young, powerlifter and the epitome of 70s Big. Young was a mastodon in a singlet who once lifted over 2000 pounds in a deadlift/bench/squat combo with three broken ribs, wore a huge set of sideburns and a mustache while doing it, and drove trains for a living.

He also died after a huge meal out with friends, which is our second most-preferred method of death immediately behind snu-snu. His mission statement was simple: lift shit, drink beer, and own over being owned. For that we salute you, Doug Young, burly Grizzlyman among Pandaboys.

HOLLY: FIVE HOUR ENERGY BRAH. (Kidding, but have you ever seen a more lackluster bunch than the sad lumps of humanity populating those a.v.-quality ads?) Onward: PAMA Pomegranate liqueur. 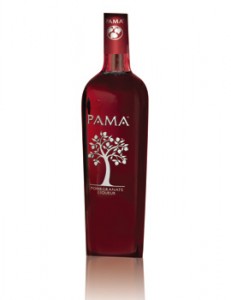 Yes, pomegranate martinis are all the rage in the exurbs these days, but that doesn't mean you need to ruin your cocktail by drizzling thick syrup reductions therein. This delightful vodka-and-tequila-based concoction will add some tart flavor without straying too far across the Girl Drink Rubicon.

Orson: The Vodka and Tonic. 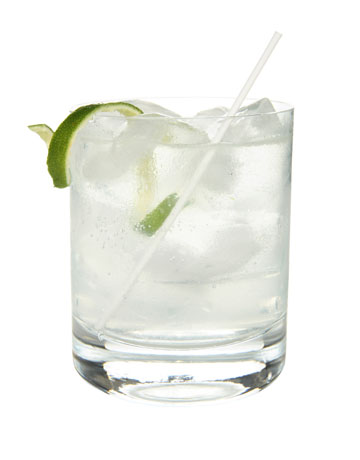 Let's get our fundamentals straight before we delve into any of the foofery (see above: Holly, as a woman, has a weakness for the syrupy and fruity, even something as quality as pomegranate syrup.)

We live in an imperfect world filled with imperfect bars and flawed, inattentive bartenders and occasionally watered down beverages of questionable composition and mixeration. A gentleman traveling the sodden, filthy, and desperate streets of this world will be in need of YE OLDE PRIMARY PHYSICK, a beverage one can lean on in any environment that can, even in the clumsiest of hands, be made to some satisfactory level of consumptionality.

The choice for this website is and shall always be THE VODKA AND TONICKE, a drink of such simplicity that even its clumsiest of variants can be tossed down the gullet with confidence. We have had almost every possible variation of the vodka tonic imaginable: Belvedere and homemade tonic made behind the bar by the tender, conscientious hands of a barkeep whose vocation approaches that of a missionary who gets people drunk on the most tangible form of spirits; average Absolut slung into a Solo cup and haphazardly mixed with flat tonic in the waning hours of a tailgate weekend with four cubes of slightly dirty ice; even the most dismal of variations, the rock bottom Mr. Boston's poured into an 8 oz. cup at a shitty college bar and topped with undercarbonated drinkgun tonic and a--YE GODS--wedge of lemon.

We're not saying they're all created equal. No, far from it. Ideally the Vodka would be premium Polish. The tonic doesn't have to be fancy, but fresh and far from flat. The ice, if you're particular, should be globular and frozen solid enough to keep the drink cold without watering it down. The glass should be heavy enough to throw across a room and cause some injury, and should definitely not have just arrived on the bar fresh from a dishwasher and still warm to the touch. There should be a lime, because scurvy never sleeps, sailor.

It's not glamourous, but like squats in a weightlifting regimen it's a course-required classic that can take you through any challenge. We have personally slayed awkward family dinners, weddings, public presentations, career crises, biplane rides, and long nights of our regrets over our failed career as a spy with the trusty vodka tonic. No one glamorizes the trench shovel, either, but that unglamorous piece of steel cut people in half well enough in World War One.

A true doughboy needs the vodka tonic in the trenches or when going over the top. Carrying one is sign you're a soldier on a mission, and not to be trifled with on your way to completing said duty.

ORSON: Korean Short Ribs. BLAH BLAH BLAH AMERICANS BLAH. It is way too easy to complain about how bland Americans tend to be in terms of what they'll eat, especially because this complaint usually comes from non-Americans whose tastes are just as narrow. The complaints aren't really fair, either, since even a committed face-eating carnivore like ourselves admits there are neighborhoods of the animal carcass not fit for culinary tourism. In our case, that's intestines that aren't stuffed with tasty sidemeat and spaces, since tubes aren't food, they're what food goes into or through. (Organs and ligaments, though, are game on in all circumstances.)

You can be urged off the filet-prime rib-strip island of beef consumption, however, without stacking the plate with eyeballs. Short ribs are well worth the experimentation, even if they occasionally require talking to a butcher in advance or going to an Asian market and chewing around slim ovals of rib bone. The French inhale them, but Koreans own the pinnacle of short-rib treatments in kalbi. Go get them at a local Korean joint to get your taste buds attuned to what they're supposed to taste like, and then give them a shot yourself. Be sure to have one or seven beers while making them; like most great cuisines, Korean recipes are tasty yet simple enough to be made while you unfurl sheets of drunkenness in the wind, and taste even better with a firm and entrenched buzz. Any nation with Korea's dedication to beef, beer, and kicks to the head can't be wrong about food.

HOLLY: Through precise scientific research conducted over a number of years, popular science has determined that bacon is the universal food: There's nothing it doesn't go with. Close behind, however, is Old Bay seasoning, which can go on nearly any dish you could possibly prepare, from seafood to burgers to potato chips. Interestingly enough, Old Bay was first developed as a seasoning to put on crab legs in bars to get patrons to buy more beverages, and anything designed to get people to drink more clearly has its head in the right place. At last count, Old Bay was propping up two-thirds of the Maryland economy; some movie theatres in the Chesapeake Bay area actually offer it as a condiment to put on popcorn. God help the bay region if any rogue McDonald's franchisees ever come up with the idea to put it on French fries, as the combination of crispy potato goodness and savory seasoning might result in a HEAD ASPLODE wave of flavor ecstasy strong enough to instantly rapture customers right up to heaven. In a pinch, it also makes a handsome groom's cake accompaniment: 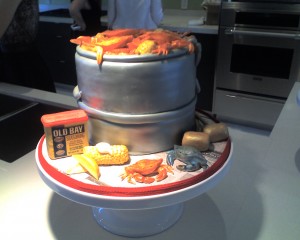 If you've got that pioneer itch (not lice, discovery!) and want to make your own, a naturally subpar but DIY-friendly facsimile is available here.

HOLLY: Controlled Building Demolition Rule #48: If what you're yelling as the charges go off is not "Fire!" but "Timberrrr!", you've done something wrong.

Fortunately, nobody was injured in the apartment building that the doomed flour factory nearly snuggled up with, and the demolished building's spectacular cartwheel earned a 9.9 from the Swiss judge.

ORSON: In video game circles, the grenade launcher in online combat games is often derided as "the n00b tube." In real life, no one gives it shit because it is a goddamn grenade launcher that sometimes likes to blow up gas tankers left in the middle of the desert.

U-S-A! U-S-A! U-S-A! U-S-A! U-S-A! Our tax dollars at work? You're damn right they are, and we'd pay for that twice over if they'll keep posting it on Youtube, because it is important for the rest of the world that our soldiers enjoy blowing both animate and inanimate things up if it suits them.

ORSON: Give me ten grand, an engine with the wheezing oomph of a trolling motor, and a pair of old-school aviation goggles and we will give you:

ORSON SWINDLE BARON OF THE AIR AND ZEPHYRS! 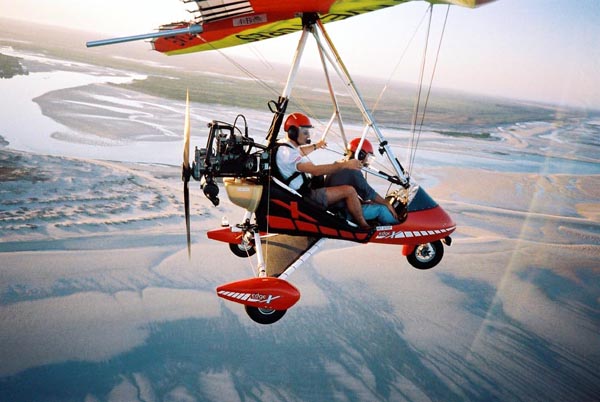 There is no worse idea for a speed freak with disposable cash than taking a glorified hang glider, welding it to a tricycle, and strapping a 50 horsepower motor and propeller to the back and taking off with a possible one-way ticket to oblivion and points beyond. Eric Scott Winston once took an ultralight to 30,150 feet, but he's Australian and therefore has gills and supplemental lungs to rely on at that altitude. Eric Scott Winston also died when the wing of his ultralight folded for no reason whatsoever while buzzing his grandmother's house, so the ultralight gods giveth and taketh. I just ordered two of them, because college funds can be rebuilt but glory is forever.

HOLLY: Just in time for the 2009 holiday season, Lego released an "Atlantis" line of toys chock full of undersea vehicles designed for some heavy-duty undersea exploration. As you can see from the "Seabed Scavenger," they ain't no joke. 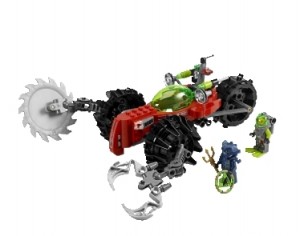 The meek among you might ask: Why, Lego? What possible need could the smiling, peace-loving minifigs have for a giant three-wheeled trike riding on studded Bigfoot tires? Why would they need rocket launchers, a giant claw, or an eight-food-wide buzzsaw? Fair questions all, but let's just say that if you were having to protect yourself from a trident-wielding undersea creature with a manta ray for a head, you'd want all that shit too.

HOLLY: This will bleed the ears of any 4X4 pussified house "electro" enthusiast, but if you like your breakbeats tweaky and your sound wobbly, the Stanton Warriors' latest promo mix is good for what ails your equilibrium.

The sickness kicks in around the 16-minute mark. Mwomp.

Available on DVD since 2006, Police Squad won't take up much of your time: there's only eight episodes period, and was cancelled after the airing of just six of them. Its greatness was enough to inspire The Naked Gun films, though, and to provide some of the most brilliant nonsequiturs and inverted trope humor ever.

The epilogue of each episode concluded with a freeze-frame--a live, awkward, and sustained freeze-frame that usually incorporated live elements that refused to stay still. Sometimes a monkey was involved.

You owe it a DVD viewing, if only to see the Zucker brothers and Pat Proft at the peak of their powers, and a reminder that television cancellation is a compliment, not a death sentence.