Don Ohlmeyer, the current ombudsman at ESPN, was the man who fired Norm Macdonald made jokes about his close personal friend and total alleged double murderer O.J. Simpson. He also produced the original Monday Night Football and headed up NBC Sports before it was run on five dollars and Bob Costas' lunch budget, but that's all ancillary to the grave damage he caused to this nation by removing Turd Ferguson from the public eye and replacing him ultimately with unfunny turboWASP Seth Meyers.* Are these two events connected? No. Are we connecting them anyway? You're damn right we are. 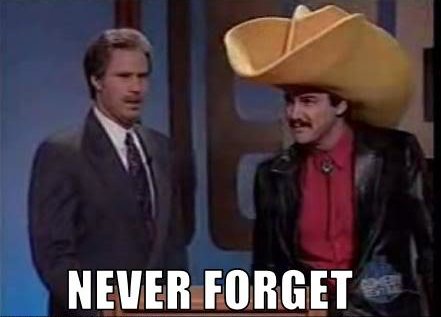 He redeems himself somewhat by turning in a far tougher column as ESPN ombudsman on the coverage of the Adam James/Mike Leach episode by the network than we thought he would, though there is the requisite pulled-punching you have to expect from someone picking up dollars for a paycheck.

According to Ohlmeyer, the coverage of the episode generated the most complaints the network had picked up over a single issue in the past year, and deservedly so.

Clearly Leach was exasperated with what he alleged to be Craig James' behavior, but those details were left out. That critical context was then lacking when Bob Davie addressed the issue in the fourth quarter of the game.
"Yeah, if you're a parent, if you sign that national letter, you've had the recruiting process, you've met the coach many times -- the James family met Mike Leach many times," Davie said. "Once you send that kid to that school, you've got an obligation to let that coach and those assistant coaches coach him. Now that coach has an obligation to treat him like he's my son, and only do what's in his best interest. But it's all about trust, Mike. Both of us have an obligation, the parent and the coach."

If the audience had been made aware of Leach's allegations that Craig James had meddled, Davie's comment would have been an indictment of both the father and the coach. That would be fair. Instead, all the audience heard was that James was "courageous" … and the only indictment was of Leach.

He stops short of full-on condemning the coverage, but lands hard on ESPN's producers for their lopsided presentation of the story and their inability to put their broadcasters in positions where they could do their jobs without taking sides or being caught up in obvious conflicts of interest. He also hints at one thing Leach and his attorneys are sure to hammer at in their suit against Texas Tech: that the praise of Leach focused on X's and O's, but the reportage often denigrated his character and reputation, something central to the Leach lawsuit. If EDSBS can be cited as reputation damage on page 42 of the suit, then certainly an Ombudsman's column acknowledging the slanted and ramshackle coverage of Leach in the incident moves up to Exhibit D at the least.

*He's Jewish. But dammit, that makes his unfunniness so much worse.