Steady study of the Digital Viking's recommendations will increase spiritual happiness and liver circumference. Apply once weekly and throughout the week for best results.

This week's Patron Saint: Colton Harris-Moore. 18 years old and already in the pantheon, Colton Harris-Moore is many things you'd like to be: unapologetic kleptomaniac, agile woodsman, and a amateur aviator who taught himself to fly planes based on video games he played. (And probably stole.) Aviator is a loosely employed term: Colton Harris-Moore has yet to fly a plane and then land it successfully, thus falling in line with DB Cooper as "Guys in the Pacific Northwest Who Are Weak On Landings." 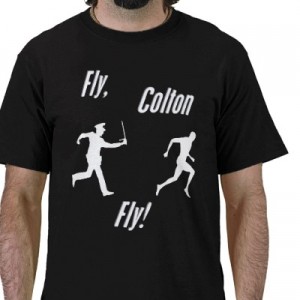 That doesn't stop him from stealing Cessnas, or from committing over 50 robberies at this point while sending his victims cheeky photos of himself, or most impressively from eluding a huge manhunt limited to one island despite being a big white 6'5" dude living in the middle of the woods with night-vision goggles on in a fortress made of pizza boxes. We're not sure what Colton Harris-Moore is doing out there, or what he thinks he's going to do with stolen DVD players in the middle of the woods, but like a gigantic pack rat fueled by Papa John's delivered to location "THE WOODS," he's living out the game of Grand Theft Auto: Puget Sound meets My Side of the Mountain you only wish you could.

He evaded a police pursuit by crashing a Mercedes-Benz into a roadside gas storage tank, using the explosion as a diversion to escape back into the woods where, he says, he feels like a Native American.

Oh, that clears it up: he's building a casino out there made of pizza boxes and stolen DVD players. You call it insanity, but they said that about Idi Amin, too. Salute, one-man crime wave and outdoorsman: your time may be limited, but no one can say it isn't without spice. (Just don't shoot at the cops again. They tend to shoot back when you do that.)

HOLLY: At this early stage in the offseason, we need something a little overtly snooty to distance ourselves from whatever manner of swill we poured down our gullets at tailgates hither and yon last fall. To that end, whip up an Aviation. Creme de violette is more widely available in the States now than it has been in decades. To this, add fresh lemon juice, maraschino liqueur (this is not grenadine) (nor is is the juice your maraschino cherries are floating in) (Luxardo is good; get it here), and dry gin. If you really want to get matchy-matchy, use the sublime Aviation gin espoused in the first Digital Viking column.

Orson: Dogfish Head 60 Minute IPA. Holy shit, this beer is like sliding tongue-first into the sweaty and delicious cleavage of a buxom beer-wench at Oktoberfest. No, beer snobs, I don't mean it's redolent of the autumnal flavors one would come to expect from the variety of beer usually labeled "Oktoberfest." I mean it tastes like fat delicious titties rolled in hops, and if you need any further elaboration it can be provided in two forms:

I bought the 60 minute IPA and had to ease into it like a car you can't quite handle, while the 90 minute one is simply too much hoppy throttle for this man. Rhetorically speaking, if the 60 minute IPA is Christina Hendricks--ample, but I'll give it a go--the 90 minute is Chesty Morgan, and is strictly for fetishists. Nevertheless, having exhausted the metaphor completely, know this: it's a fantastic fucking beer, and would go really well with some big beefy sandwich like a French Dip or plain ol' roast beef intestine-wrecker.

Additionally, it's all-American, so you can go President Camacho and stick big red and white and blue sparklers in your hair while drinking it and chanting "U-S-A! U-S-A!" to piss off the Flemish and Wallooni beer snobs in your universe. MY BEER ISN'T FLAVORED WITH THE RAPE OF THE CONGO, WAFFLEDICKS.

ORSON: Sardines. EWWWWW THEY'RE SALTY!!! Big deal. So are chips, and you inhale those like a delusional crackhead trapped in sauna goes after puffs of steam from the hot rocks. Sardines fueled Viking invasions and kept sailors strong despite the rigors of sea travel and constant gonorrhea infection. Their power can certainly help you in your arduous journey through spreadsheet Mordor.

So unfairly maligned as hobo food by the cartoons of my youth, sardines have made a deserved comeback for the "people who like food that tastes like food" movement. Technically made up of several groups of the family of small fish of the family Clupeidae, sardines make superb bar food, are loaded with omega 3s, give you the proper caveman vibe as they come loaded with tiny but edible bones, and most importantly give you, the diner or bargoer, the message you want to broadcast when you just want to drink and be left alone: my breath smells like beer and salty fish, and this is nature's do not touch sign.

In many states, being spoken to by anyone but service staff after eating sardines constitutes justifiable homicide. I'm not clear on which ones, so just shoot first, ask questions later, and trust the wheel of justice to sort the rest out for you. They go well on salads, too, which you may want to look into if you're toting around an extra ten to fifteen pounds of dickshade like I am at the moment after football season.

HOLLY: Aretha Frankenstein's Shrimp & Grits. This is Aretha's. Rachel Ray visited once for a segment on her show, and the staff hates her guts, so they've got that going for them. 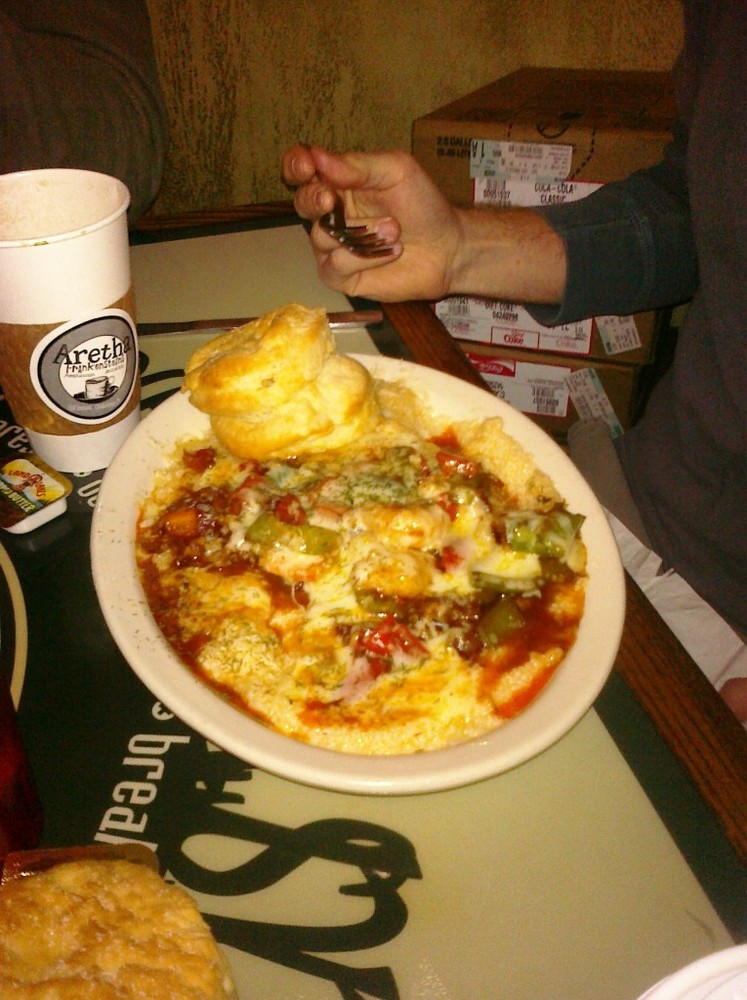 The shrimp and grits need no further introduction.

HOLLY: Sam Barros' RailGun:
From its conception, the original PowerLabs Linear Magnetic Accelerator ("Rail Gun", or "Railgun") was conceived for the primary goal of simply proving that it could be done; on a low budget, with common materials and powered by a never tried before electrolytic capacitor bank.

Orson: This dance line from a 1974 Soul Train dancing to Earth, Wind and Fire's "Mighty, Mighty."

(HT: Lang Whittaker.) If the guy at 2:08 doesn't set your panties on fire, ladies, you're wearing asbestos drawers.

Like the best things in life, there is no purpose to the Bugatti Veyron 16.4's existence. It is an evolutionary dead end: with a top speed of 253 mph, it either becomes a plane or a tactical missile with a max payload of two human beings at this point. There is nowhere to go, nothing more to learn from it, and no offspring from its genes. It flies, it explodes, or it sits in your garage. These are its three possible developmental ends.

What is can do in the Veyron is tear the paint off other cars, outrun police helicopters, and guarantee the most spectacularly expensive fiery death one could possibly have, all fit into a package based on alien technology. $1.25 million on four wheels, the Veyron has as much horsepower as two Corvette Z06 V8s, and will empty a gas tank in two minutes at top speed. Presumably you won't have to worry about this, since time elongates as you approach the speed of light. At that point you'll either have hit something and aerosolized, or traveled back in time. The good news: the Veyron's nimble handling should help you dodge velociraptors and other predators you encounter in your travels.

It comes with custom luggage to fit the tiny cargo space, no car holders, and a shirt that says "I LIKE TO BURN MONEY." 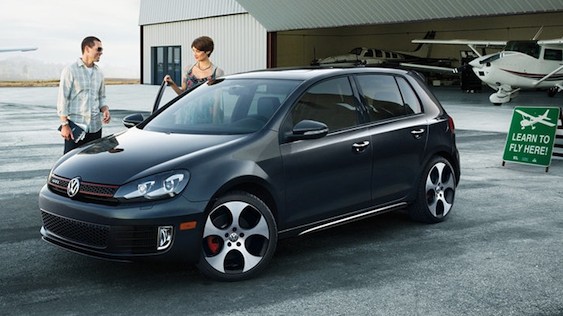 This was the car that basically invented the concept of the "hot hatch" all the way back in 1976 -- take a plain old boring-ass economy car (in this case, the VW Rabbit), firm up the suspension, drop in an engine any reasonable person would consider way too powerful for the vehicle in question, and let that sucker fly. The GTI has now been through 35 model years and five redesigns, some of which have been faster than others, but it's still the premier hot hatch on the market, capable of outrunning many so-called sports sedans costing twice as much. Only it doesn't look that much different from a standard Golf, so you can piss on speed limits with abandon and the cops still won't pay half as much attention to you as they do to the middle-aged guys driving 65 in their Corvettes. 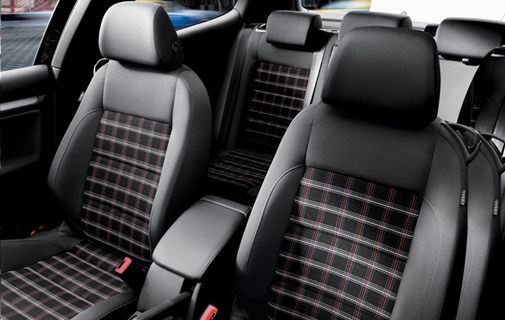 Plus it comes with plaid seats. Get your girl a skirt to match, and hit the road.

Sloughed off in last winter's post-holiday cinematic dumping ground, it's the latest release from Alex Proyas, responsible for The Crow and Dark City (and I, Robot, but we don't talk about that). Despite the ACTION! trailer, it's a genuine-article science fiction movie, haunting, atmospheric and spooky, and would about be a perfect film if it had Dark City's Rufus Sewell in place of Nicolas Cage. (Nicolas Cage, to his credit, is actually pretty good and shows an unnatural level of restraint for being Nicolas Cage in an apocalypse movie; it's just that it's impossible to forget he's Nicolas Cage anymore. He dies in the end, though, if that helps.)

The Darkside Zodiac, by Stella Hyde. The canon can and should include the finest of bathroom books, and Stella Hyde's Darkside Zodiac is the best we know of, especially since it's basically one long piss on the concept of a.) astrology and b.) human decency. It dissects each sign by its darkest possible traits, which would get really tedious over almost 400 pages without punchy prose, bitter snark, and the book's "come and go as you please" design.

I'm particularly fond of the Sagittarius chapter, which includes the following deathless bits:

WORK: No one could say you were lazy; you'll do anything, anywhere, but not for long. You usually run three or four jobs at once, all of them erratically...if the minutes begin to drag, you organize paperclip racing, inter-departmental chair-spinning contests, or trashcan infernos (you bet on whose burns longer before the sprinklers go on and the whole office closes down for the day.)...No one employs you for long, because after a while their insurance company tells you not to, but you don't care if you're canned...The black economy adores you because you always lose the paperwork and you don't give a rat's ass about health-and-safety regulations.

IDEAL CRIMINAL PROFESSION: Mugger. The simple opportunistic crime you were born for: requires no forward planning or special tools--just daring, physical strength, and a quick getaway; yields instant cash for you to lose immediately at the races.

SEX: It's not the case that you are a heartless jackhammer--you always give your partner a friendly slap on the haunches while you are doing your post-coital stretches.

GAMBLING: ...you will be the farm, your firstborn, your best friend's firstborn, and Grandpa's pacemaker on which will be the first raindrop to make it to the bottom of the windowpane.

Sometimes a book cuts you so deeply you have to respect its knifework, even when it's writing about the wrong sign. For that and against the general disrespect given to well-written books designed to sit on coffee tables or the back of toilets, we praise thee, Darkside Zodiac. Now get out of my head.