EVERYDAY SHOULD BE BAMADAY: WHY YOU SHOULD ROOT AGAINST TEXAS

Share All sharing options for: EVERYDAY SHOULD BE BAMADAY: WHY YOU SHOULD ROOT AGAINST TEXAS

By reasons of SEC Contract, we have to pull for Alabama in the national title game. The following is a list of completely unfair reasons why you should root against Texas tonight. Colt McCoy is a fake name. Yes, there is a gun to our head right now, but that's life.

Colt McCoy. A more elaborate ploy has not been foisted on the American public. If you believe his name is actually Colt McCoy, then you actually believe he was not born in a quite upper middle class suburb of New Haven Connecticut, is not actually named "Walter Hutchinson," and did not in fact attend Andover where he lettered in--gasp!--lacrosse before his family decided to move their lucrative corpse-oil and baby-meat factories to Texas for tax purposes. You'll also believe Mack Brown doesn't live solely on the blood of not just babies, but celebrity babies. 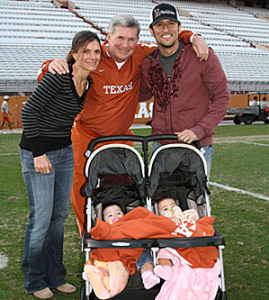 Thank you for your delicious contribution to Texas athletics.

Texans fans don't cheer. They don't, despite having the Godzillatron, pom-squad hotpants, a band dressed up like the Riders in the Sky, a motherfucking giganto-Steer of a mascot on the sidelines a video showing the Texas team morphing from a magic herd of cattle into football players, and enough brown liquor coarsing through their veins to stun 200 Bevos.

As rootin'-tootin' as Texas fans should be, their reputation as DIF'ers* is notorious. Bryant-Denny sports a fair number of cranky oldsters who won't stand for anything but the ghost of the Bear himself ("And he better be wearin' a hat, or I ain't movin'") but at least the place can turn into a hornet's nest in a single play. Texas is quiet enough to hear things, and that's not a proper football environment.

Now try to imagine him scrambling without hearing the "Brusha brusha brusha" song tonight. You won't be able to, so don't even try.

Texas Is Crawling With Unstoppable Killers and Pistol-Happy Mexican Drug Lords. We learn everything the same way you do: from television. If years of watching television shows has shown us anything, it is that Texas is crawling with devious crackers bleeding oil money determined to do anything to get at some other devious cracker bleeding oil money. Sometimes they are kidnapped by devious Mexican drug lords bleeding drug money, and then some tough-ass cracker has to come and start whipping ass all in the middle of it. (Source: Walker, Texas Ranger, Matt Houston, Maverick.)

The remainder of Texan civilization is spent pining in slow motion at football practices or drinking beer with your three underachieving friends in the alley. 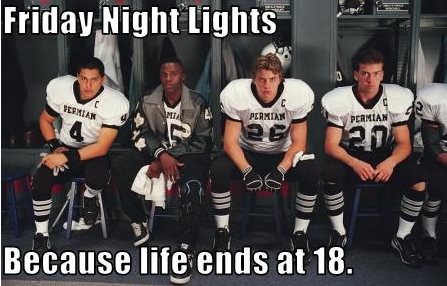 Thus passes the living purgatory of being a Texan.

Jordan Shipley. Oh, of the Houston Shipleys? WHY YOU MUST INVITE HIM TO THE DEBUTANTE BALL, KISSY POO MARSHALL.

Mexican Food Snobbery. Already touched on, but when a state can only boast about how good the food from somewhere else is in their state, you have serious problems. At least Alabamans drink Karo Syrup and inject whole pork fat into their veins with a zesty, thoroughly Alabamian flair, and don't bite the culinary styles of their THOROUGHLY UNAMERICAN NEIGHBOR TO THE SOUTH.

Bad editing. Whoever put the place together clearly didn't understand concision. You could set nukes off in West Texas without people noticing. (We're pretty sure Mike Leach did.) There's so much unnecessary filler in between things, vast wastes without utility or purpose. If it were a novel it would be The Wind-Up Bird Chronicle, and any drive to El Paso or Lubbock would be the scene where the protagonist sits in a hole for a hundred pages dreaming about Japanese war atrocities. Correction: Japanese war atrocities are more entertaining than any drive to Lubbock. Put a brick on the gas petal, one belt around the steering wheel, and one around your neck, and you'll be set for a "short" drive around the state.

Fine, Leave. You may have a hard time rooting for Nick Saban, but remember the reason your defense is good in the first place: because the Dark Lord Himself convinced Will Muschamp to join the dark side and join him. He only works 22 hour days and Boom Motherfuckers his way through the day thanks to the complete soul replacement Saban performs on all his finest assistans. Major Applewhite didn't want an nuke-powered artificial heart? Was scared to resign from his family to spend more time with the team? Fine, go back to where they tolerate those things. Ahab doesn't need weak men when hunting whales, sir.

Terrence Malick. How you make a stultifying movie about Guadalcanal is beyond us, but good lord Malick did it with The Thin Red Line. What should have been two hours of pure cinematic napalm turned into three hours of mooning over the rain falling off of leaves. We're all but certain that most letters home consisted not of free-verse poetry about life, death, and fate, but this.

Instead of that, we got Gomer Pyle reading Whitman for two hours in between a few quality gun battles. Screw you, Texas Native Terrence Malick, for wasting our time with Private Ryan's Valium-fueled Pacific Tour. We'll be over here watching The Dirty Dozen for the thirty-fifth time. RUN JIM BROWN RUN YOU'RE FASTER THAN NAZI BULLETS OKAY MAYBE NOT--