Share All sharing options for: COMPELLING REASONS TO WATCH THE ORANGE BOWL

Doc Saturday put out an open call for reasons to watch the Orange Bowl tonight. BANGARANG.

1. You have to. There are exactly three college football games left in the season: this, the GMAC Bowl Featuring Rust Belt Tebow vs. Troy, and the title game. Even if you count the GMAC Bowl and its endless shots of the USS Alabama in the harbor in Mobile ("MOBILE: WE'VE GOT FLOATING SCRAP METAL"), that's only three games until you're plunged teeth first into the hard, unforgiving curb of the offseason. Smell the roses while you can, even if they have BEES in them. < ---mixed metaphors

3. It's Iowa. Notice the completely uniform confusion surrounding this game?

The stunned looks your friends give when asked to give an opinion as to what's going to happen here? Iowa is a team made up completely of dark matter, a theoretical cat in an unopened box preventing you from determining whether it is truly dead or not. Iowa plays solid defense. Iowa sorta kinda sometimes runs the ball. The rest is a muddle of Stanzi-centered mayhem consisting of three quarters of disaster, one quarter of raging Tyler Sashdom, and hammering Penn State while almost losing to Northern Iowa. It's not pretty. Hell, it's ghastly as slashed tires sometimes. But it is not predictable, and at least they've got that going for them.

This year's performance features Kool and the Gang. A music snob would mention that they weren't the band they were as pioneers of the LA funk scene of the 1970s. Those people can go sit on rusty spikes, because they wouldn't know fresh and exciting if it bit them in the face.

5. BEEEEEEEEEEEEES. Georgia Tech, if you have not had the pleasure of watching them this season, runs a triple-option attack that looks like a cross between square dancing and MMA drills. People fly at knees; there's some choreographed do-si-do-ing, and then someone's running through a heretofore unseen seam in the defense for a touchdown. Josh Nesbitt, Jonathan Dwyer, and Anthony Allen are all different runners: Nesbitt is the rabid ostrich, all legs and elbows, Dwyer is the angry Cape Buffalo, and Allen has the odd, flat-footed gait that makes him look like the fastest man with fused ankles ever. 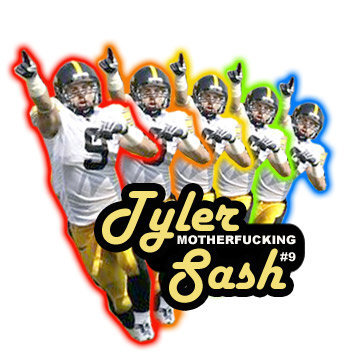 7. Adrian Clayborn. 9.5 sacks. A fierce defensive end, and a focal point due to being one of the read points on the option. Where he goes dictates the direction of many pitch plays, and Paul Johnson will shift blocking around based on what particular lineman Clayborn snaps in half before halftime. He also was the victim of a female stalker, meaning he must smell like sex and cookies.

8. Special uniforms! Because that always works well in bowl games!

9. Paul Johnson. Johnson's protuberant lips make for some of the best lip-reading in college football, ensuring that you can see every "You can't really be that stupid" he drops on his players mid-game. He also may threaten a official with a severe beating. He's done it before, albeit in another sport.

10. Because this is the last chance you have to watch FOX molest the sport of college football. It's the final molestation that's the sweetest. Trust us: we were raised Catholic AND in Boy Scouts.