Share All sharing options for: FLYING DUDES: THE SUGAR BOWL 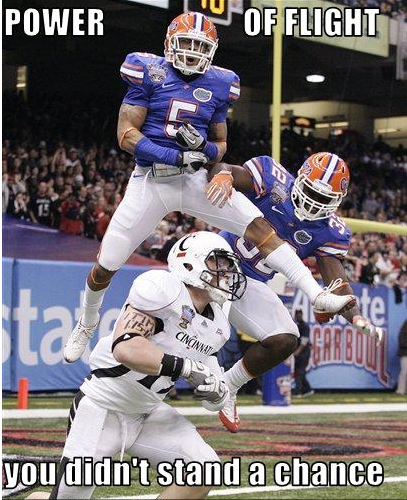 That was fun. Today's a maintenance day around here for the most part, but a few notes:

--If you were near Major Wright last night and are alive this morning, you should consider yourself to have survived a plane crash with no survivors. The safety played with a violence bordering on negligence, at one point knocking Janoris Jenkins out of the game when he attempted to Malcolm Jenkins up a Cincy receiver. Whatever rageahol he consumed last night was above 100 proof and illegal in all but three states.

--Mardy Gilyard, you are built of adamantium and sheer balls. Florida spent the better part of the game ignoring whatever Tony Pike was doing and instead running helmet-first at Gilyard's tender parts, and he was still running full speed in the fourth quarter. Lionhearted is a cliche we'll happily use, but only because we assume a young Gilyard ripped one from a live lion at the zoo, jammed it in his own chest, and uses it for backup when he hits the afterburners on pass routes. He died well out there.

--Chippiness abounded on both sides of the ball. For Florida, this was a positive sign, since like all teams from the state of Florida numerous personal fouls = "we're here to try tonight." For Cincy...yeah, that didn't end so well for them.

--Riley Cooper has the most lustrous hair we've ever seen. It belongs in a conditioner ad. Women weep over it, and if sold as a wig it would fetch no fewer than five figures for its bounce, shine, and body. If he grew it long enough armor would spontaneously sprout around him, a sword would pop in his hand, and a Florida ID reading "Galahad, Sir" would appear in his pocket.

--This was a magnificent way for Tebow to finish. It also happened against a defense injected with Ketamine before the game, but we'll take it. WAAAAH YOU RAN UP THE SCORE. Stop it or don't, time on the clock, the worst argument in sports and a total perversion of the notion of competition, blah blah blah.

--Brian Billick wasn't as horrible as we thought he would be. Bad, yes, but not an atrocity like Brennaman.