The Big Ten has concerns, like having one All-American, saving money by throwing nickels at low-wattage coaching hires, and making sure cable subscribers have full access to 24 hours of women's volleyball a day. That last one is not a critique, because female volleyball players are very attractive and play in outfits specially designed to show off their levitating assmeat withstand the rigors of the sport. The rest of the Big Ten's network's programming is cheap and abundant, especially the home improvement show Bill Lynch does for free where he makes something, almost finishes it, and then has another Big Ten coach set it on fire just before the end. 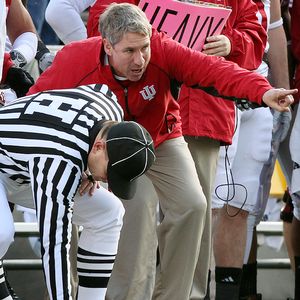 "Bill Lynch Makes Nice Things, And Then Can't Have Them: Wednesdays at 7:00 only on the Big Ten Network.

The biggest concern, though? Dress code. First, Dantonio. Now: Tressel, who forbade Pryor from attending the team dinner for not wearing jeans and not dress slacks.

"They were nice jeans," Pryor said. "But Coach Tress is a classy guy."

"I just didn't think it should have been a big deal about it," Pryor said. "Some of my teammates said [the event] wasn't as classy as it was supposed to be. But Coach Tress is a classy guy, and what he wants we have to do. We just forgot our pants. Nothing against the team or anything like that. I apologize to the team ... I'm kind of mad we missed a good meal, a free meal at that."

Tim Gunn objects, sir: dark jeans are acceptable for evenings out, which a team dinner with your teammates and coaches certainly qualifies as, especially since the notion of getting all dolled up just to sit in a room with a bunch of other men in a non-military situation seems a little...odd. Then again, since JT proudly rocks some of the deepest pleats in all of college football, he's probably not following Herr Gunn's advice on anything fashion or non-fashion related. The possibility of Pryor having Stockholm Syndrome, though? This concerns us.

(BTW, on pants? If you're doing the dress slack thing, one single tasteful pleat is acceptable, since Schnelly does it, and this has won him admiration from ladies the world around who treat him as a fertility totem.)