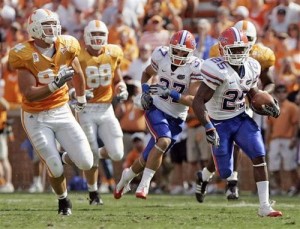 ...because yeah, it's a "deal," as in something to consider, but it's not like losing Brandon James 2008. James' production as a kick returner has fallen from being the second most productive punt returner in 2007 to the 43rd most productive returner in 2009, a dropoff due either to people paying more attention to him than ever before in coverage, or because of his off-field herbal therapy applied in inhaled doses directly to the lungs.*

The upside for those watching the offense and ripping their own molars out with pliers in frustration at the Daz-bone's stagnations: James will not be an option for the pity-grope carries and receptions he gets as a senior, a bizarre fixation of the Florida offensive coaching staff throughout the season that burned potentially productive carries and touches for Jeff Demps and Chris Rainey.

The most productive punt returner and kick returner the University of Florida ever had has played his last game, and that is a sad thing, but offensively it's a blessing in disguise. What, four touches a game can't matter for the Florida offense?, you say. You obviously haven't watched the 2009 offense very much. Every carry matters this year for this squad, and will certainly matter against a team like Cincy that can erase 24 point deficits in as little as a half of football.

*We kid! Smoking weed doesn't make you slower when you're twenty-one. Actually, if the SEC is used as evidence, it makes you dramatically faster.