The New Mexico Bowl, Brought To You By New Mexico, Because How Can You Love Someone If You Don't Love Yourself And No We Could Not Find A Sponsor But That's Okay.

The state's official insect kicks your official state insect's thorax. If the goodie bag at the New Mexico Bowl rolled with the realness, they'd include a free tarantula hawk right next to the Fossil Watch and inevitable logo'd baseball cap. A huge, indestructible wasp wandering the desert with an insectoid howitzer dangling from its chundle, the tarantula hawk does that horrifying dick move of all dick moves by finding a tarantual, hitting it with its paralyzing sting, and then laying eggs which will hatch and feed on the spider before ruining the spider's credit, killing its pet fish, and urinating on the grave of its mother. In the great waiting room of life, the tarantula hawk sits in the "Owns" row and stares a terrifying stare at the "Gets Owned" people across the way. We advise shooting them with pistols if they get too close, but hit them, since grazing them only makes them angrier. 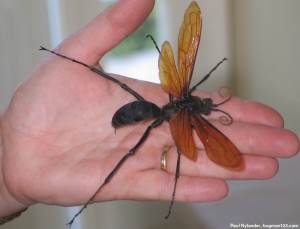 Your announcers will be Terry Gannon and David Norrie. A celebrated climbing duo from New Zealand? ESPN's Team Z College Football Announcing Squad? The co-authors of a paper on cat genetics? The founders of an obscure but critically lauded 1990s mellotron and theremin duo? They can only be one of these, but they could, in theory, be any of them. Whoever they are, one of them pissed in a potted plant at Norby's house at the ESPN Christmas party and is serving their time in broadcasting hell.

Wyoming's excited about it. And should be, since most 6-6 teams whose only wins against an awful slate include victories over New Mexico, Weber State, and UNLV don't deserve to go to bowl games, even one as forlorn, sponsorless, and stuck on Dec. 19th at 4:30 in the afternoon like the New Mexico Bowl. We are not exaggerating about the excitement STARBURSTS AND NAVAJO FLAGS: 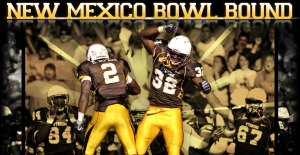 They will face Fresno State, an 8-4 team deserving your support after dealing [NAME REDACTED] a cruel defeat on a fat lineman catching a tipped 2 point conversion and backing into the endzone against Illinois in overtime. Ryan Matthews is their running back, and he is very, very good, which most leading rushers in the nation tend to be. Wyoming is the 91st ranked rushing defense, and surrenders 170 yards per game on the ground. This combination alone should make for breezy free-running for Matthews, who will use Wyoming defenders as convenient props for spectacular parkour demonstrations in the second half.

Is there any other reason to watch this game? No, not really, though it could be a fair free-fire zone for a while due to both teams' indifference to defense. The time spent basking in Pat Hill's mustache rays will give viewers their dose of Vitamin Manbeast, though.