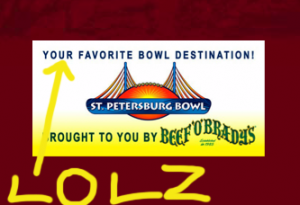 We were clamoring for this to be called the Beef O'Brady's* Bowl almost as soon as we got over our initial shock and certainty that this whole thing was an elaborate internet prank, but it's St. Pete, so they've got a hardwired urge for ultimately futile efforts to class up the joint. Introducing the St. Petersburg Bowl Presented By Beef 'O' Brady's**, in the style of a platter of congealing wings being presented to your table of gaping exurban cakeholes by a junior college-slogging aspiring radiation technologist who's got a disquieting vacant look in her eyes, but who needs eyes to get a halfhearted blowjob in the back of your XTerra after close? UP TOP.

Mini Corn Dogs
Holy smoking hell, this place sells mini corn dogs, which we're guessing makes this a cut-rate poor man's dead hobo's Capital One Bowl. Your combatants are Central Florida and Rutgers, two 8-4 teams finishing second in C-USA and fourth in the Big East. If that's not unappetizing enough, we remind you that this is not the minor Florida football program coached by Howard Schnellenberger.

Killarney Chopped Salad (with crisp wontons, for that taste of Ireland)
Central Florida hasn't actually put together a bad season here, with losses to two ranked teams (Miami and Texas, both decisive but neither gruesome blowouts), eventual conference champ East Carolina, and Southern Miss back in Week 2 when the Golden Eagles still had a quarterback. Rutgers is still seemingly slogging away in the post-Ray Rice-era disinterest backlash, but ... look, we were going to say something nice about how they reeled off seven wins in eight games after that ugly opener with Cincinnati, dropping only to Pitt by a touchdown, but these guys lost to Syracuse, so no, the season is sans possibility of redemption; this is natural law and not open for debate.

Baby Back Ribs with Kickin’ Bayou BBQ, THERE ARE TOO BAYOUS IN THE NORTH ATLANTIC.
Your key matchup: True freshman Rutgers QB Tom Savage and UCF DE Bruce Miller. And this will be a matchup in the most intimate sense of the word -- Rutgers has allowed 34 sacks this season and Miller is 5th in the nation in backfield quarterback molestation. Joe Martinek is the team's leading rusher, but with UCF boasting the country's fourth-ranked ground defense, don't count on him getting very far.

Chocolate Eruption Cake (not making this up)
The line: Rutgers by 3. Chance that George O'Leary might say something horrible on television in the event of a minor upset to the swath of UCF fanbase clamoring for his departure: 1/4. Chance that his ill-timed choice of words will include the phrase "Chocolate Eruption": Even.

POST-MEAL PURGE
The best thing about this matchup by a country mile? Its proximity to Tampa. Your mileage may vary.
*linked because if we told you there was a Sister Hazel download on their front page you'd never believe us
**the only time we will type that ridiculous fauxpostrophe construction correctly, so help us Cranky Old Testament God.
The St. Petersburg Bowl kicks off on ESPN at 8 p.m. Eastern on December 19.