The deadline for Florida fans to buy tickets to the Sugar Bowl has been extended to 5 p.m. today, and if you call and order more than four now you'll get this BEEFY GATOR ARM MAGNET: 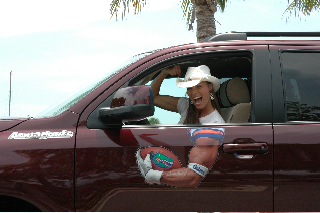 Not really, of course. (HT: Alligator Army.) Purchase more than four Sugar Bowl tickets and you will likely win the price of armroom in the form of an empty seat next to you, because an extended deadline always means one thing: that Florida fans are not exactly snapping up their allotment of reserved tickets, and that between a Cincy team coaching with an interim coach (who will not be there thanks to the hiring of Butch Jones) and a Florida team taking the game as a consolation prize....well, you're looking at a flop of Orange Bowl-scale proportions. (At least the Orange Bowl is going to have a spectacular score.)