PLACES A BOWL GAME SHOULD BE HELD: MOGADISHU

Share All sharing options for: PLACES A BOWL GAME SHOULD BE HELD: MOGADISHU

EDSBS's ongoing series on bowl games that should be held continues with: The Mogadishu Bowl. 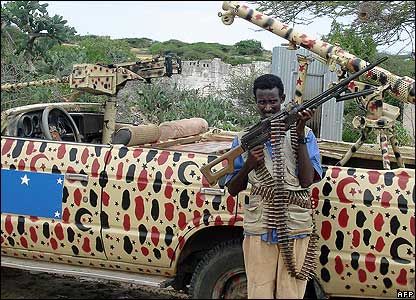 Who: The D-1 teams with the weakest six-win seasons, so go ahead and pencil in K-State and someone else. A bottom tier SEC team would do, as well, though let's just hope it's Vandy because ID'ing the bodies will be much easier if the labels are designer brands.

When: December 24th, or the 25th, or the 26th. Time variable due to atmospheric conditions (i.e. RPGs and artillery flying through air.)

Where: Mogadishu, Somalia, the world's most dangerous city. Specifically, the game will be held in Mogadishu Olympic Stadium, an august edifice whose motto is "The Chinese Built It In The '70s, So It Must Be Good!"

The stadium seats 35,000 people and is centrally located, though there may be a slight problem getting to the stadium, since it was recently used as a military encampment by an occupying Ethiopian peacekeeping force.

"This was a military base for a period of two years and there may be mines, bombs and small arms in and around the stadium and that will endanger the civilians who are coming here to play," he added.

No more dangerous than Baton Rouge or the area surrounding USC's campus, in other words. 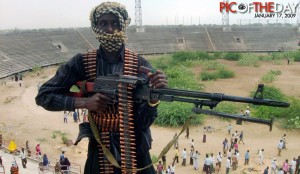 A bowl game known for defense.

For lodging, we recommend cozying up to one of Mogadishu's warlords. There are important reasons for this. Unlike the Islamists in town, the warlords will let you drink. They may let you do anything in fact, so with the proper bona fides you might be able to quench your thirst for carjacking or hijacking a truck full of goods. Sure, this is also possible at the PapaJohns.com and Detroit Bowls, too, but only in the Mogadishu Bowl can you do it outside the purview of United States law. (Or any law, for that matter.)

Cozying up to a warlord should be easy, as you merely have to convert $50k into a fungible good of value, get it across as many as fifty checkpoints without being killed or worse, and then winning the warlord's trust before he kills you, feeds you to a pit full of hungry dogs, has you sold as meat, or turns you over to a bigger warlord for a cut of your eventual ransom. (Reminder: Pre-load "ransom account" before you leave the country.) Once you've pulled all that off, however, just hope the warlord isn't killed before the game, and you'll be fine.

Accomodations: another easy answer. Stay at the ironically named Peace Hotel, rent an armored ship with its own 24/7 security detail and stay anchored in the harbor, or just wing it and sleep anywhere, since that's what the citizens of Mogadishu have had to do for years. The place is littered with decrepit old Soviet tanks. Scare a few critters out of one of them, make sure it's not claimed by street urchins, and then make sure someone in your party stays watch to warn you if/when the locals attempt to set the whole thing on fire with you in it. Do not bother attempting to protect yourself with a gun. Somalis are a jocular people, and will likely giggle as they level the family howitzer at you.

Also, do not plan on going to the beach. A camel processing plant sits right on the bay and belches a rich chum of processed camel tissue directly into the bay. This attracts a vicious horde of sharks who have been known to attack even those cautious enough to merely wade knee-deep in the water. Considering how few Somalis know how to swim, it's probably a good idea to avoid the beaches evefn if you're wearing military-grade shark repellent. If you get in trouble and need lifesaving, no one's going to help you. (Notice a theme?)

As for bowl activities, the answers are simple: running for your life, cowering behind three blast walls and hoping a skinny kid in sandals fired up on qat doesn't cast a bloodshot eye your way and heave the world's luckiest RPG shot into your molars, and a parade. We kid! There will be no parades, because you'd die, and also because (little known fact) Somalis just plain hate 'em for some reason.

Why? To support the bowl system by showing that every town should engage in the glorious exhibition season that makes our sport so special. Additionally, EDSBS is setting this entire thing up as a kidnapping ring, and will help you fake your own death for the low fee of $75,000 for the starter package. Additional tiered fees follow, with the high end topping out at $350K for the "Steve Fossett" package.

How? It's the Libertarian Bowl. Everyone will just figure it out for themselves, and it'll be just fine.

*Because "failed state" is such an ugly term.