JIM LEAVITT PULLS A PATTON WITHOUT THE WINNING RECORD IN CONFERENCE

Share All sharing options for: JIM LEAVITT PULLS A PATTON WITHOUT THE WINNING RECORD IN CONFERENCE 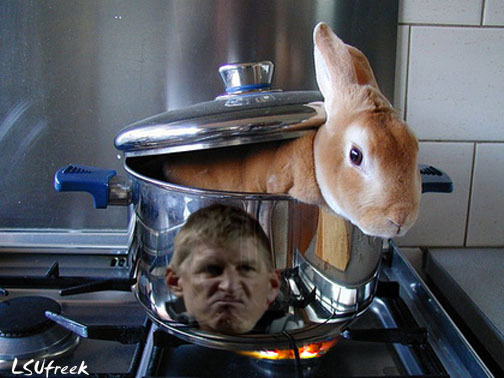 At least Patton had a winning record in conference (North African/South European) when he decided to go bonkers and slap a soldier. Jim Leavitt, 17-18 in the Big East and the only coach the USF program has known from its trailer-incubated infancy in the 1990s, may be in the kind of trouble the deepest of waders can't protect you from. This ventures into the realm of commentary we don't even think is humanly necessary, but may be.

A. You don't hit your co-workers.

B. Seriously, you can't punch your co-workers.

C. But if you do, it should be a superior or an equal.

D. Ideally, this should be a sprawling, Old West-style bar brawl where strangers get involved, prostitutes pop out from behind door frames just in time to smash bottles over heads, and you and your best friend wind up to punch each other, realize you're about to punch each other, and then duck to both knock out marauding baddies behind each of you.

E. You never, ever punch your subordinates, because working underneath your supervision is surely punishment enough from life.

In totally obvious summary: he's in deep shit here, even if only temporarily. (And yes, he and Mangino worked together, but Bill Snyder will drive a man to the killing blackness in your brain.)