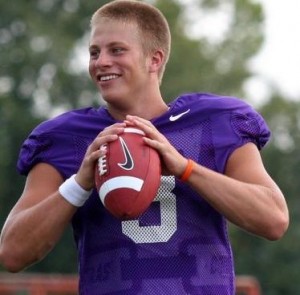 If you're feeling an orange-and-purple pall over your day, the source is emanating from the Clemson Tigers, a surprisingly fine 2009 program considering it's coached by a grown man named "Dabo", that will lose C.J. Spiller to the draft this year ... and the less heralded but no less loved hatchling QB Willy Korn to an early flight from the nest for playing time:

Clemson redshirt sophomore quarterback Willy Korn intends to graduate from Clemson in May of 2010, then transfer, the school announced today. Korn, who lost the starting job to Kyle Parker this year, will have two years of eligibility remaining.

You kind of had to be there to understand the feelings the EDSBS family harbors for the fluff-haired sophomore who played in fewer than half of Clemson's games this semester (though he did rack up five sacks for his trouble), but you only have to take a swing by the EXTREME KORN REPORT to know we're not alone. (p/s: Dear WILLY KORN, please come to Tennessee, where we have many beautiful and obliging ladies and no quarterback to speak of. Thank you WILLY KORN. Willy Korn.)