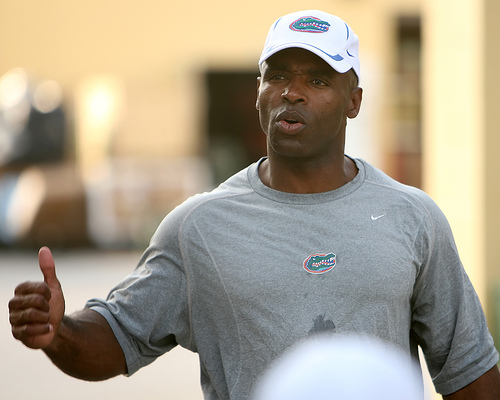 The interviewing technique was simple: wear a shirt with three buttons undone so the Louisville brass, already wooed by the number one defense in the nation for 2008 and his overall exceptional body of work as a defensive coordinator, could be mesmerized by just a hint of the raw overpowering masculinity Charlie Strong brings to the simplest of tasks. He took them to a beverage machine, where it offered him a drink free before ejecting a pair of lacy panties and a hotel key. He showed them what happens when he tries to hail a cab, and they stood in awe as a crowd of beautiful children and woodland creatures carried him aloft to his destination. They nodded respectfully when he stared at the sun and made it go blind for five minutes. They beheld his trap'd-up majesty, and has it has been for so long in Gainesville, it was good.

Louisville has announced a 4 p.m. press conference tomorrow where Charlie Strong, Florida's defensive coordinator since 2002, will likely be announced as their new head coach. Godspeed you black emperor: Strong did nothing but create ballsy defenses, including the one carrying Florida to the 2006 title almost singlehandedly--a defense that, last year's unit mentioned with no disrespect, may have been his crowning achievement since the '08 unit had such support from the offense. (Though the one game award may have to go to the BCS Title game last year, where Florida stymied what many considered one of the best offenses to ever take the field in the modern era.)

The opportunity is long overdue, and richly deserved. Now let us hug like men, though not too tightly in your case, lest a broken rib scar the memory of our parting. If Louisville gets nothing else by hiring a tireless recruiter and brilliant defensive mind, it gets a coach capable of demonstrating the benchmark weights in all exercises for incoming recruits all by himself. Vaya con dios, sir.