SEC CHAMPIONSHIP: ANXIETY AND ITS MANY VARIETIES

Share All sharing options for: SEC CHAMPIONSHIP: ANXIETY AND ITS MANY VARIETIES

A brief look at the naked fears one anticipates before a championship game against a fearsome rival. Um, we mean Y'ALL GONNA LOSE WOOOO GO GATORS. < ---UNCONVINCING 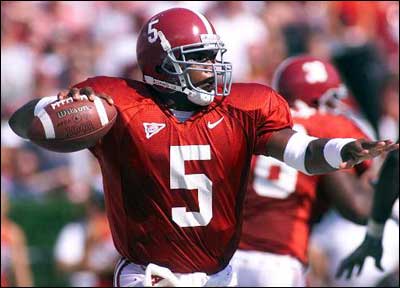 Panic disorder : People with this condition have feelings of terror that strike suddenly and repeatedly with no warning.

The things we have no reason to be worried about going into this game constituting our nightmare scenario: for instance, the repeated horror of thinking Florida will find itself in some aberrant and terrible situation it has no logical basis for being in, like Greg McElroy growing to three times his normal size and having a 300 yard passing game, or Mark Ingram recovering to wreck shop at full strength like a cycle of ten year locusts named "the returning spirit of Shaun Alexander."

Or the Mississippi State Tebow and his Dan Quizzenberry mechanics returning at their worst, heaving jump balls for the Alabama defense to feast on at will. They happen suddenly and for no reason, but they're there.

Obsessive-compulsive disorder (OCD) : People with OCD are plagued by constant thoughts or fears that cause them to perform certain rituals or routines.

Completely ritual-less, disorder not found. Saves us from being one of those freaks doing elaborate rituals with their hands in the redzone or after touchdowns, because those people look barking mad, as in the sort you don't want to be too close to from fear of contagion.

Post-traumatic stress disorder (PTSD) : PTSD is a condition that can develop following a traumatic and/or terrifying event, such as a sexual or physical assault, the unexpected death of a loved one, or a natural disaster.

Fear of Alabama running all over us and stifling any scoring attempts by Florida's outwittable offensive coordinator flailing at the controls of a punchless offense. Residual fear of Alabama keeping this to the kind of low-scoring scrum dependent on a game-winning field goal shanked wide by an erratic Caleb Sturgis. A PTSD-induced fear of turnovers and blown coverages, a la Ole Miss 2008. A karmically overdue pantsing of a complacent undefeated team of the kind Florida delivered to Ohio State in 2006. A blocked extra point will kick these into overdrive, because blocked extra points are the warning farts announcing the approach of the unstoppable dysentery of defeat.

Really only dreading the inevitable Daniel Moore print, since Alabama tend to think the same of their team no matter the record, even when they go 7-5. "Well, we won a national championship that year, and were probably the better team." Tide fan response: "Yeah, but FORTY-TWO NATIONAL CHAMPIONSHIPS AS DETERMINED BY AN INFLUENTIAL MEMBER OF THE WAFFLE HOUSE FAMILY AND NICK SABAN HIS NAME BE PRAISED." So reallly, no more or less obnoxious than usual due to their even-keeled approach to assumed supremacy. Remember: it's Georgia fans who swell and shrink depending on the weather, not Bama fans.

Julio Jones can be handled. (It's a drag route. A freaking drag route. Every. Freaking. Time.) Rolando McLain cannot, though, and in our dreams he's the one you summon in the mirror by saying his name three times. See: PTSD nightmares of DeMeco Ryans sucking Chris Leak's soul from his body like a Dementor.

Generalized anxieties: Oh, just the usual fear that Crazy Old Testament God is waiting right there with a hammer because he can. Other than that, we're fine. The ceiling is quite cozy, and hanging from it by your fingernails is more comfortable than you think it would be.