Welcome to our Factor Five Five Factor Preview of Oregon State at Oregon. The Factor Five Five Factor Preview examines the Thursday Night Game, which this week takes even more epic positioning amidst the Thursday Night Specials of seasons past by being the default Pac-10 title game AND a bitter rivalry game. Oregon State pulls into Autzen Stadium, aka "The Little Box O' Hell." We're hiring champions, gentlemen, but there's only one position available.

/snaps pool cue in half

Good luck on your audition. And if he loses his helmet, well, screw it. 'Quizz says they're overrated, anyway. 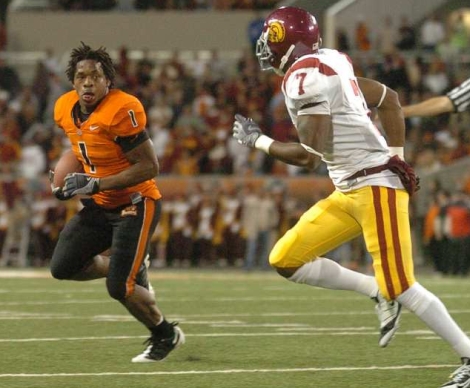 Category one: Nebulous Statistical Comparisons of Dubious Validity. Oregon does precisely what you expect them to statistically, putting up 37 points a game with ease, flashing jillions of formations and spread-option wickedness while alternating carries between fat-ankled Polynesian Tebow type Jeremiah Masoli and running back LaMichael James. James replaced LeGarrette Blount, who in turn replaced LaForge Gauloise, start running back from Tours and noted deconstructionist sculptor. Le backfield, il est francais.

What may surprise you is how close Oregon State is production-wise on offense to Oregon.

The Beavers average around 32 points a game, and more importantly have something Oregon's defense has a demonstrated aversion to: a running back all too happy to spend the night wearing down linemen and linebackers to their last spare reserves of glycogen. Jacquizz Rodgers has 13 TDs, over 1300 yards rushing, and will attempt to play the part Toby Gerhart worked to the hilt against Oregon in a 51-42 upset, but you know, like, um, a foot shorter, 30 pounds lighter, black, and not taking 42 hours of classes.

Numbers and homefield advantage do lean the Ducks' way ever slightly here, with the defenses being a push at the 40 spot nationally. By a beaver hair, as one shouldn't say.

Category Two: Mascot: He's just Donald Duck in your school's colors: true, used with the kind permission of the Disney company, who only demands the fresh, unspoiled blood of infants in return for its use. (Seven gallons a year, approved by Disney's infant blood authenticator, and otherwise they don't care how the hell you find it.) But we're post-postmodern, and authorship is overrated. It's now where something originates, it's how it's used, like Xzibit's head saying funny things with the word DAWG in them, or turning a dancing Swede into a cultural icon. Consider his numerous strengths:

--He committed assault in front of thousands of people:

--He rides a Harley into the stadium, and may fall off it on camera.

--He gets drunk in bars. 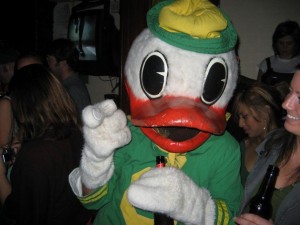 Seeing his activities on paper, he cannot be differentiated on these three counts from a member of SAMCRO. Benny the Beaver is a fine mascot, sure: acceptable, defintely unique, but cursed with the overmasculinized GRRR I A HARD MASCOT look the Hokie Bird suffers from (aka the low-carb protein shake aggro mascot redo that went around sometime in the late 90s.) At this point he looks more like a jowly buctoothed bear with a horrible skin condition on his tail than a beaver.

We like our mascots pudgy, cartoonish, and seemingly harmless, both because we lean retro like that and because it is a thousand times funnier when they go into berserker mode and begin kicking someone's ass, riding around on a motorcyle, and drinking beer to drown the rage inside them.

Category Three: Aura. Autzen, in case you've never watched a game there or seen it on television, was built far from the campus at Oregon, and in fact sits somewhere in the mystical Scottish highlands between a smoke-belching moor, a grim loch, and a mountain range controlled entirely by pot-dealing Trolls. The commute sucks for fans, but it does mean getting rain, snow, fog, rain/fog, fog/snow, sleet, sneet, hail, clear moonlit nights, and the occasional rain of frogs all in the course of a single game.

The stadium is also banked at a wacky angle, something you'll see in the camera angles tonight: the pressbox camera at Autzen is so steep some shots will appear to be shot from NSA satellites eyeballing the homeland from a hundred miles above the stadium. (And were this broadcast by Raycom, quality would be comparable.) ESPN will mitigate this with a jillion other cameras roaming the field, but the noise is unavoidable. Oregon has been going on a silent count all week to prepare for the noise, a side effect of Oregon's fanbase being just redneck enough to hold a proper WOOOOO for three hours and the steep concrete noisecatcher made by the stadium's design. Even proud SEC fans have doffed their caps in tribute to Autzen's noise, something made even spookier when a cloudbank falls onto the stadium and then disappears just as quickly ten minutes later.

Advantage: Oregon State. It's close, we'll grant you, but "Dax Dilbeck" gives the competitive edge here to the Beavers.

Grudges? Scores to settle? Sheer cussedness? A category leaning to Oregon State, a team of outstanding and proven cussedness who, year in and year out, manages to pull together eight or nine wins, conjure a thousand rusher out of nowhere, and cobble together a respectable defense from less-than-highly recruited pieces. They fit the mold of Schnellenberger-ish "ornery bastards" quite well, and even in their losses to Arizona an USC they threatened to the final whistle. Oregon may be fast, flashy, and artfully presented in a thousand different permutations of green and yellow, but Oregon State will pound the ball and swing away with Sean Canfield's absurd 70% completion rate, and it will keep them in this game until the end.

EDSBS FACTOR FIVE FIVE FACTOR PREVIEW SUM: 3-2, Oregon, You've Been Factor'd! This, of course, means bet the other way usually, but this year's Factor Five results sit just under .500 for the year, and are thus even more useless than usual. We would type "for entertainment purposes only," but that would be an insult to entertainment.