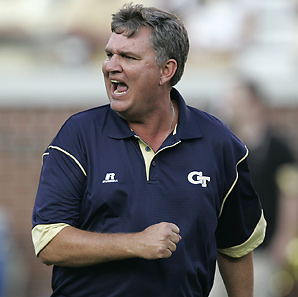 I would like to apologize for my remarks yesterday regarding Georgia fans yesterday. They follow below not as repetition of the mistaken sentiments contained within, but to illustrate just how wrong I was.

"I understand rival games. I understand in-state games," said Johnson, 19-6 in two years as Tech's coach. "We're not going anywhere. We'll be here for awhile. It's not the be all, end all. We're 1-1."

When asked about the psyche of Jackets fans in the wake of Saturday's loss, Johnson didn't skip a beat.

"Get a thick skin. Guy giving you a hard time and you get tired of it, punch him in the face," he said, tongue-in-cheek.

I would like to apologize for making such vague comments about our rival, and for implying that our fans should punch Georgia fans in the face. Not only was it inappropriate for a coach to make such comments about another team's fanbase, it also gives some piss poor fightin' advice to a fanbase clearly in need of solid consultation on the art of no-rules backyard tusslin'.

1. Use your surroundings. A handful of dirt can be your best friend, especially if you're fighting on a pile of glass. That's actually throwing glass in someone's face, not dirt, but that's how they do it in Wilmington, so you might as well learn to defend it.

Pint glasses are good, but wrap your hand in a napkin before smashing one over an opponent's hand.

You'd be shocked at what you can use. I've knocked out men with beverage guns. I won a brawl in a Marietta Carrabba's with a plate of baked ziti. I've ripped the ear off a surly bastard in Statesboro with barbecue tongs.

Why? Because winners do what they have to in order to survive. If it looks hard or sharp or heavy, it wants to be your friend. Use it, because fair is for spring days, skin, and games of Candy Land.

2. Go for the nuts. No, it's not pretty, but nothing brings a man to involuntary prostration before the Lord like a solid boot to the baby baubles.

Most people think one will do, but I like to really, really work that area, first with an opening boot, and then a solid flurry of punches, kicks, and headbutts. It's like the fullback dive: you might think it's only open once, but you'll be astonished how often you can pop it up the middle for big gains.

I once beat up a landscaping crew that crossed me with nothing but a swinging bag of cocoa mulch and a solid stream of ball-crushing nutpunches. It works because it hurts and threatens their ability to reproduce. Do it, and do it frequently, because once you have headbutted a man in the crotch, he is forced to view you as a threat not only to his testicles, but to the very order of the world itself. Trust me: this will scare the shit out of him.

3. Do you have a car? That's what bumpers are for. Is the person you're trying to run over sitting comfortably in a chair in their living room minding their own business? Too bad. If we didn't want people to get run over in their living room, we wouldn't keep making houses you can drive right through in anything larger than a hatchback.

4. Knees. They're like the "off" switch God built into the leg.

5. DOGS. Does he look reasonable to you? 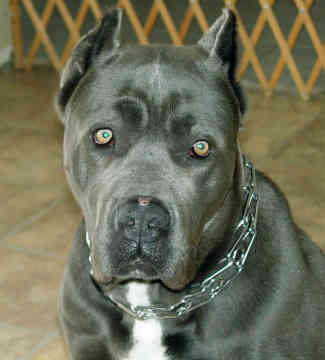 'Course he doesn't. He's not reasonable, and you'll thank him for that when he starts taking whole man-chops out of the leg of the man whose ass you're kicking. Have a dog follow you around. Feed him meat and rage. Occasionally throw him in a bag of live chickens to hone his killing instinct. If he falls during the fight, he may be used as a projectile or swinging weapon.

In conclusion, I apologize for my comments and hope my statement clarifies my sentiments more precisely than my hurried, thoughtless comments yesterday.

ps. You would also be stunned at the damage you can do to a man with nothing but a set of keys.