Dollar Bill Doug put down the turkey leg and vodka long enough to file this week's edition of his picks. Enjoy, provided you're not too busy kidney-punching an old woman in a Target for a slightly discounted Rock Band: Roxette Special Edition.. 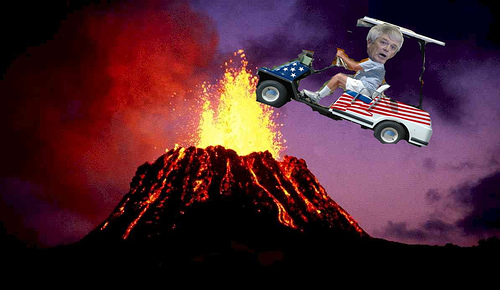 It's a relevant image, we swear.

RISK LEVEL 1: Having that extra scoop of mashed potatoes even though you're already so full you're about to barf.

It's Rivalry Week in most of the major conferences, and the theme of the week is a time-honored Thanksgiving staple. No, I'm not talking about turkey, stuffing, or togetherness; I'm talking about rage, the kind of seething resentment you can only feel toward family members you don't actually like but will end up stuck in close quarters with this week anyway. That pretty much sums up Georgia and Georgia Tech, barely 60 miles apart and filled with loathing for one another at all times -- no more so than this year, as Georgia is playing the part of the handsome, popular older brother who just lost his job and is having to move back in with his parents (wow, does that sound familiar?) while Tech is the perennial dork all of a sudden on the verge of making it very, very good and determined to stick it to big bro.

Anyone who (like me) saw Georgia's collapse against Kentucky last week should be scratching their heads at why UGA is only a touchdown 'dog to Tech in Atlanta this weekend. Yes, Georgia's run defense has improved immensely compared to 2008's late-season disaster, but the secondary is ripe for a pillaging from Tech's Josh Nesbitt, who'd be getting mad Heisman love if the Heisman voters were capable of looking past the top three teams in the BCS standings; yes, Tech's secondary stinks, but against UK, Joe Cox showed he's just as likely to heave one up to one of their defensive linemen.

If the Bulldogs keep the final margin within single digits, then they've surpassed the fan base's expectations by leaps and bounds. Now if you'll excuse me, I'm behind on my Nicolas-Cage-in-"Leaving Las Vegas" impression. Think I can drink myself into a coma by Saturday evening?

Dan Mullen's first year amongst the downtrodden and yearning denizens of Starkvegas has gone much better than expected -- four wins, including two in SEC play, and a couple more instances in which they put monster scares into heavily favored opponents -- but over the past couple weeks it's begun looking like Mullen's gotten as much out of his '09 squad as he can. MSU got crushed at home by Alabama's defense, then shelled on the road by Arkansas's offense, and they limp into the Egg Bowl to host an Ole Miss team that's won five of their last six and should be feeling pretty good about themselves after stringing together two meaningful wins for the first time all year.

State's defense, ranked next-to-last in the SEC, is primed to get trampled by Dexter McCluster (430 net rushing yards in his last two games, which makes me wonder when "McCluster'd" is going to become as big a part of our lexicon as "Croom'd" was); MSU has a decent counterpunch in its arsenal in Anthony Dixon, but Dixon stands to meet a lot more resistance from the Rebels' front seven, which allowed neither Tennessee nor LSU to go over 100 total yards rushing. Particularly after last year's 45-0 bloodletting, it should be apparent that Houston Nutt isn't above running it up on the Rebs' hated in-state rivals when he thinks he's got bowl scouts to impress; there's every reason to think Mullen will fashion State into a revenge-capable outfit eventually, but there's just as much reason to think Ole Miss will be able to put more than a single touchdown's worth of distance between them and MSU this time.

RISK LEVEL 3: Disobeying your dad and screwing around on the slide

It's become a cliché at this point, but that doesn't make it any less true: The Gamecocks suck out loud in the month of November, to a degree that even Steve Spurrier has not made a lick of progress in reversing the trend. Over the past five seasons, Carolina is 6-10 in November and an even more shocking 1-3 against Clemson, and if the Ol' Ballcoach can't get it turned around soon, a guy named "Dabo" is going to start speaking of him the same way Spurrier talked about Phil Fulmer all those years.

Nearly five full seasons into the Spurrier era, the Gamecocks still have no running game to speak of, which means this game is almost certain to end up in the hands of Stephen Garcia, and whether they admit it or not, that's probably not where SC fans want it to be. Garcia has improved his decision-making immensely compared to last season but still has four picks in his last three games, and will be going up against a pass defense tied for second in the nation with 20 interceptions. Barring some miracle turnaround in the Gamecocks' late-season mindset, Dabo goes to 2-0 against the Evil Genius this weekend, and South Carolina gets reduced to haggling with Georgia over who gets to go to Shreveport for bowl season and who gets to go to Birmingham. If you can find a more depressing sentence written about SEC football this year, be my guest.

RISK LEVEL 4: Buying tickets to the national-championship game if you're a TCU or Cincinnati fan

Image is of no relevance whatsoever. We swear.

When even Dennis Erickson is saying stuff like "The good news is, there's only one game left," you know the vibes are not good in Tempe. Riding a miserable five-game losing streak and just bounced out of the bowl picture by UCLA, the Sun Devils have little to play for other than state pride, but the ASU student body apparently can't even defend the gold "A" on the mountain outside their stadium, so maybe pride has gone straight out the window too.

There is reason for the Sun Devils to hold out hope -- the suspiciously skimpy line on this game probably has to do with the emergence of the formidably named Samson Szakacsy as ASU's QB and an excellent defense poised to frustrate a Wildcat attack that will be without leading rusher Nic Grigsby. But the Sun Devils have gotten off to agonizingly slow starts over the course of their five-game slide, getting outscored by a total of 103-31 in the first halves of those games, so there's a high likelihood they'll be placing the burden of a big comeback on Szakacsy, who will be making only his second career start. By the end of this season, Sun Devil fans may be hoping Erickson's next golf-cart jump doesn't quite make it over the volcano.

RISK LEVEL 5: Making fun of Uga VII's death to a Georgia fan's face (seriously, we've got nothing to lose at this point and will dismember a bitch)

Kiffin's Kids earned a bowl invite with last week's win over Vanderbilt, but otherwise the Vols are whistling past the graveyard this week -- they let Vandy hang around all the way into the final minutes of the game and have every reason to be worried about their prospects of stretching their win streak over the Wildcats to 25. (Which is the longest streak any one team in Division I-A holds over a single opponent now that Navy appears to have fashioned a leash and dog collar for Charlie Weis).

Tennessee's linebacking corps has been injury-decimated to the point of starting sophomore walk-ons, and it's showed -- they've allowed 691 rushing yards over the past three weeks, including 282 to Mississippi's Dexter McCluster alone, and guess what, Kentucky's Randall Cobb possesses a good portion of McCluster's considerable skill set. Between Cobb and running back Derrick Locke, last seen scooting around Georgia's front seven like they were traffic cones, Kentucky has never had a better chance to get back at the Vols than they will this Saturday. The swagger and mental edge that comes from having whacked a rival team 24 straight years still counts for something, but if you're really feeling blessed this holiday season and want to take a risk, put some cash on the Wildcats to pull the upset.