15-20 Michigan State players "stormed" a dorm at the campus of Michigan State University in an incident Sunday night, according to wire reports. The players hit women and men alike in the assault, so let it be shown that while there might be some tenuous link between domestic violence and football, the actual violence perpetuated by football players in this instance was free of any gender bias. 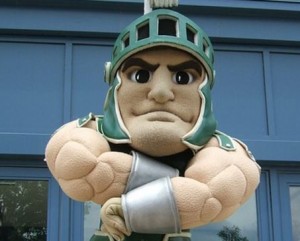 The investigation into the matter is underway, and it's unknown how many football players were involved and what their specific roles were. The most important question, though: were they wearing ties when they did it?

Brent Mitchell, a communication junior who said he was sent to Lansing’s Sparrow Hospital after being punched in the face, said some of the men wore ski masks, but others were recognized as football team members.

"I walked up and said, ‘It isn’t worth it.’ A guy with dreadlocks hit me and in the scuffle slapped, hit females to get them out of the way," Mitchell said.

Rich Rodriguez thanks you for the diversion of the local spotlight, slappy Spartans.