BRANDON SPIKES SHOULD WORRY ABOUT HIS SHARKLIKE TENDENCIES

Share All sharing options for: BRANDON SPIKES SHOULD WORRY ABOUT HIS SHARKLIKE TENDENCIES

The principle is transferable to so many other things, though. For instance, take Brandon Spikes. He is a fierce linebacker, swimming through blocks and sniffing out plays other predatory linebackers miss. He's practically sharklike, we tell you. Sharks have a lot of positives traits. They kill things well. They never stop moving. They often RSVP for parties well before others and have a natural sensitivity to the issues of LGBT other fish don't have. They're sharks, they're proud, and you can't take that away from them unless you kill them and eat them. Then you've pretty much taken everything away from them, because you've eaten them. 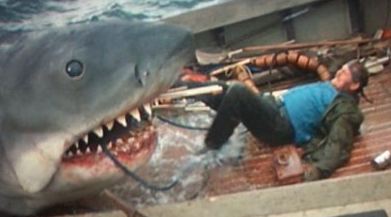 Is this Brandon Spikes' future? With the right insane associative rhetoric, IT VERY WELL COULD BE.

Sharks, who are just like Brandon Spikes and vice versa, can do the same to you, and that's the problem. Sharks eat things randomly. You might see Brandon Spikes eating a license plate on the side of the road because it's shiny one day, and then what are you going to do, Florida fans? Let's not even get on the topic of what happens to pregnant sharks around other sharks.

A pregnant shark at a New Zealand aquarium was bitten by another shark, unexpectedly releasing four baby sharks as visitors watched.

An aquarium spokeswoman said stunned visitors saw the injured shark and alerted staff that they had also seen things float from the gaping wound.

What happens when Spikes finds shark love and then bites open his beloved because, well, he's a shark and that's what sharks do? Do you know how much shark day care costs? Or how strained your relationship with your shark in-laws will become, especially because sharks have such difficulty dealing with their emotions anyway? What about when he just begins attacking men who look like Robert Shaw? Do you know how many barrel chested sketchoid guys with mustaches there are in Florida? He'll never have time for football.

(If this does happen, though, Chuck Amato should grow a mustache, and someone should film this for the benefit of NC State fans.)

WHAT THEN FLORIDA FANS? We're just saying, he might want to switch to decaf, because then you'll be stuck with all these shark babies you can't eat at once, sharkbacker Spikes.