NOT THE KIND OF SEXY COUGAR YOU EXPECTED

Share All sharing options for: NOT THE KIND OF SEXY COUGAR YOU EXPECTED

Wyoming plays BYU this weekend. This marks an important point in the season for Dave Christensen and the Cowboys, who can continue the upward trend in a rebuilding year by getting above .500 and defeating a powerful conference foe in BYU. There is historical resonance here, too: this game marks the 40th anniversary of the Black 14 game in 1969. 14 black members of the Cowboys squad were kicked off the team that year for planning to wear black armbands in protest of BYU's policies of racial discrimination. (The official policy of discrimination was lifted in 1978.) Wyoming won anyway by a margin of 40-7, but the incident caused a national stir anyway, and led to further incidents like this one against Colorado State in 1970.

Most notably, when BYU's basketball team played at Colorado State the following winter (1970), protestors threw raw eggs and a flaming molotov cocktail on the floor, and a piece of angle iron struck a newspaper photographer, drawing blood and knocking him unconscious. Approximately 50 blacks and whites charged onto the floor at halftime to disrupt a performance by BYU's Cougarettes, and police were called in to quell the riot.

That's how one properly storms the floor. Enough history: bring on the Cougar dong, please. 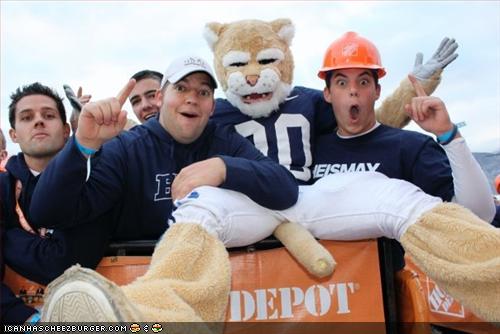 Ahh, that's much better. (HT: The geniuses at Shaggy Bevo.) Nothing clears up a moment of solemn reflection like a poorly placed Cougar tail and one kid in an orange hat who looks reaaaaaaallllly psyched about his mascot packing furry womb wand the size of a Claymore in his holy undergarments.