Share All sharing options for: KRAGTHORPE'S GALLOWS HUMOR IS GAMETIGHT 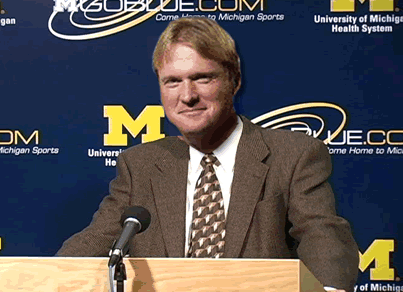 The prospective mistress of choice, seen two seasons ago in a fantasy sequence.

Steve Kragthorpe is doomed, doomed, doomed, but if the true test of a man is his gallows humor, then Kragthrope has something to rely on in the shadow of certain firing. He opened his press conference like this today:

"Sorry I'm late. I was actually on the phone with Jon Gruden. He wanted to know how tall Will Stein was."

Well done, Coach Ignominious Verb. (HT: Big EZ via Card Chronicle.) If Gruden does come to coach Louisville after Kragthorpe's inevitable firing, the Cardinals can look forward to such evaluations of their performance as this:

--"You're a player!"
--"That's a football player!"
--"Play occurred!"
--"He reached out and caught the football. That's a real football play!"
--"Declarative sentence of no analytical value."

He would be missed in the broadcast booth like the citizens of London miss dear old cholera.