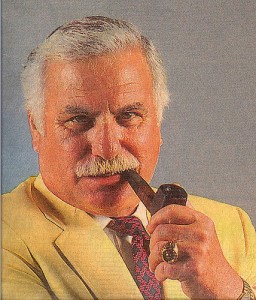 2. Kansas. Liking the way that young man runs his football team. Even with that glandular disorder.

3. Mules. Loyal. Trustworthy. Cook up well if you know how to do it.

4. Cribbage. Underrated game. Won my first wife off Barry Switzer in a late night game once. I'd play it today if I wasn't afraid of being ruled by passion again.

5. Johnny Paycheck. Now that's a man who could write a love song.

Liked it so much we used it as our wedding song.

7. USC. That little hippie's got something going on out there, I tell you. Even if he dresses like a damn hoodlum.

8. Sock garters. When you show 'em, they wonder: "What do his knees look like?" Only a slattern gent shows his knees on the first date, though. Leave them wanting more with the garters. The knees are a man's vagina. Show them only when you mean business.

9. The seventeenth hole at Boca Lago golf course. Favorite place to relax. If you wonder why the grass is so green around the bunkers, well...that's the byproduct of all that relaxin' I been doing there.

10. Floatplanes. Best car I ever bought. Or the worst boat. Can't decide.

11. The stuffed corpse of Lee Marvin. Sitting in my living room as we speak. Best conversation partner I got.

12. Virginia Tech. I like a man with scars. Unless he's a man I gave those scars to, because it means I didn't finish the job. Speakin' of, I gotta go kill Frank Beamer now.

13. Cufflinks. The little signal lights indicating the profile of a great he-ship of the man-line.

14. Gladys at the Publix deli counter on 6th Ave. Watching her cut meat would make a Havanese rentboy go straight. Such forearms on that woman.

15. Haiti. If you're a street charcoal afficionado like myself you'll never have a better vacation. It's delicious stuff.

16. Washington Huskies. Fake Canadians? Sure. Good football team? As long as Don James is in charge, you bet they are.

17. Plaid. Scottish camouflage, but useful for all seasons because it takes any stain you can throw into it. Believe me. I've tried. You can throw up a Thanksgiving dinner and a flagon of scotch into it and wear it out without turning a head. The Stealth Fighter Technology of patterns.

18. Gold Bond Powder. Couple a snorts in the morning will put you in the right frame of mind.

19. The Lincoln Town Car. When it hits a pedestrian, they stay down. (I'm looking at you, Honda Accord.)

21. Sugarcane. Does double duty as a whoopin' stick and tasty summer treat.

22. The Florida Atlantic Owls. You have to believe in yourself, or no one else will.

23. Whittlin'. I like to start with a whole cow and keep carving away until I get the original shape I wanted.

25. Leaving Las Vegas. They don't make lighthearted comedies like they used to, but this one's close.