YOUR PAPER CUT IS NOTHING OFFICE WARRIOR

Share All sharing options for: YOUR PAPER CUT IS NOTHING OFFICE WARRIOR

Stoics sound great when you quote them. Take Seneca, for instance:

Scorn pain: either it will go away or you will

Cool, right? Works really well when you twist your ankle in a minor fashion on a run, or when you pull a shoulder muscle reaching for a bottle of scotch in the back of the liquor cabinet. 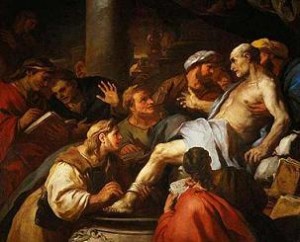 Rarely do you have to face an injury that might actually give you option two here, but thanks to compartment syndrome, it is something football players can face on the field. Case in point: Washington State running back James Montgomery, who could have lost his leg or even died if he hadn't gotten a speedy operation to relieve pressure in his leg caused by compartment syndrome.

Close friend Dwight Tardy, a senior running back, said team doctor Ed Tingstad told him Montgomery "probably could have died" if a Sunday morning operation had been delayed too long. A wait of one to two hours might have led to amputation, Tardy said Tingstad told him.

"He (Tingstad) was pretty rattled and shook up," Tardy said. "He started crying."

(HT: CFT.) Compartment syndrome is fairly rare, and can be caused by a wide array of possible factors. It also has varying degrees of badness, thus ranging from Jason Taylor's relatively minor case to Montgomery's extremely serious one where it will take 6-12 months to figure out if he'll even play again.

If you're morbidly curious and have a strong stomach, it looks like this. Scorn pain all you like, but respect it when it's talking to you, since it might save your leg (or your life.)

(Also, don't listen to Seneca, a notorious suckup to Nero. That Nero.)